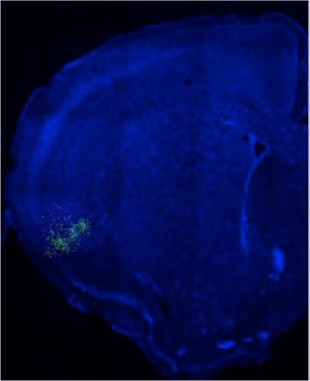 In the right hemisphere of a mouse brain stained with DAPI (blue), some neurons in the insular cortex express GFP-CREB (green).YOSHITAKE SANO

When a nasty taste makes the stomach turn, neurons in the brain’s insular cortex fire up to form a memory of the foul flavor. But only a subset of cells are involved in storing that memory. In mice learning to dislike saltwater, new memories favor neurons with high levels of the cyclic-AMP-response-element-binding protein (CREB), according to a study published today (November 13) in Current Biology.

A team of researchers at the University of California, Los Angeles (UCLA) examined the development of a conditioned taste aversion response in mice that overexpressed CREB in a subset of insular cortex neurons. Precise inactivation of the CREB-expressing neurons revealed that these cells were required for the mice to remember the bad-taste experience. CREB, which activates the transcription of genes that...

“There’s a huge amount of work on molecular mechanisms of memory storage, and there’s relatively little known about the processes that are important for memory allocation—which cells really code the memory,” said neuroscientist Dietmar Kuhl of the University of Hamburg in Germany who was not involved in the study.

The idea that CREB determines which neurons form a memory makes sense, added Mauro Costa-Mattioli of Baylor College of Medicine. “The neurons are competing for the memory trace—not everyone can get it,” he said. “Those that are more excitable have more chances.”

The study builds on previous work by UCLA’s Alcino Silva and his team, which demonstrated in 2009 that CREB levels regulate the allocation of fear memory in a different brain region, the amygdala. “The amygdala and the [insular cortex] are two dramatically different structures in the brain,” said Silva. “We were hoping that the phenomenon of memory allocation was universal, but we had no way of knowing until this [study].”

To test the role of CREB in the insular cortex of mice, Silva and his colleagues used a viral vector to introduce two genes into excitatory neurons in this brain region. One gene directed the cells to churn out green fluorescent protein (GFP)-tagged CREB, while the other encoded a “designer receptor” called hM4Di, which is activated by a drug called clozapine-N-oxide (CNO). The drug has no effect on normal cells; its only activity is the selective silencing of neurons that express hM4Di.

Then, the researchers performed a conditioned taste aversion test: they presented the mice with both normal water and saltwater made with sodium chloride—mice, like humans, tend to enjoy the taste of salt. In another training session, the saltwater was instead made with lithium chloride, which induces nausea and discomfort. Three days later, when the animals were again given a choice between water with and without sodium chloride, mice that had tasted lithium chloride learned to avoid the saltwater. But in mice injected with CNO before the test, the CREB-expressing neurons were silenced, and the animals continued to prefer saltwater.

To test whether CREB mediates memory allocation by increasing neuronal activity, the team examined the expression of arc, which encodes a cytoskeleton-associated protein upregulated in excitatory neurons. In the insular cortices of mouse brains harvested after the conditioned taste aversion test, fluorescence in situ hybridization (FISH) showed that arc expression colocalized with GFP-CREB expression in the same cells, indicating bursts of activity in the neurons during memory retrieval.

“It never ceases to amaze me that we know enough about memory to be able to channel specific memories to specific cells,” said Silva. “We are able to genetically engineer the insular cortex so that we can determine ahead of time which neurons will be engaged in which memory. To me, that’s really magical.”

On the other hand, he said, these experiments are “limited, because in the real world, real memory is not about single strong memories.” Rather, said Silva, we remember events as “strings” of individual sensory memories. He said his team is now working to understand how these strings are formed, and CREB clearly plays a part.

For Costa-Mattioli, the demonstration that similar processes control memory allocation in different parts of the brain is “very tantalizing. . . . Perhaps this mechanism allows the strengthening of connections between brain areas.”