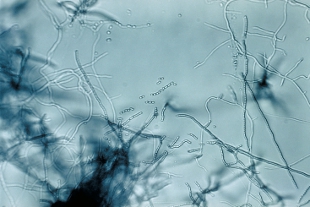 Slide culture of a Streptomyces species WIKIMEDIA, CDC PUBLIC HEALTH IMAGE LIBRARYIn the mid-2000s, scientists identified two novel antimicrobial compounds in the bacterium Streptomyces platensis, each of which target a different enzyme involved in fatty acid synthesis in other microbes. Platensimycin and platencin are now being explored as a new class of antibiotics. Research published today (February 20) in Chemistry & Biology from investigators at the University of Wisconsin-Madison and The Scripps Research Institute in Jupiter, Florida, details the mechanism by which S. platensis protects itself from its own antibiotics: the bacterium employs an enzyme during fatty acid synthesis that is unaffected by the compounds.

“It is a nice piece of work and is perhaps one of the first complete demonstrations of antibiotic resistance mechanisms from genome sequencing information,” microbiologist Julian Davies, a professor emeritus at the University of British Columbia who was not involved in the...

“The novelty is in the detail here,” agreed David Hopwood, former head of the genetics department and now emeritus fellow at the John Innes Centre, who also did not participate in the research. “It tells us a lot of interesting things about fatty acid biosynthesis in bacteria . . . [and] about the way that the antibiotics interact with [that] pathway.”

Since researchers first identified platensimycin and platencin, they have questioned how the compounds do not disrupt the synthesis of S. platensis’s own fatty acids. “If the organism is making an antibiotic which is potentially lethal, it has to protect itself,” Hopwood said. “So almost always an antibiotic producer has self-protecting mechanisms.”

To identify those mechanisms, Scripps microbiologist Ben Shen and his colleagues performed bioinformatics analyses of the open reading frames in the genomes of two strains of S. platensis and identified four genes that, based on their homology to enzymes of known function and their apparent lack of a role in antibiotic biosynthesis, the researchers hypothesized may confer resistance to platensimycin and platencin. Follow-up experiments revealed that the enzyme PtmP3, which is resistant to the antibiotics, had replaced two fatty acid biosynthesis enzymes, FabF and FabH, which are normally inhibited by the compounds, and expression of PtmP3 in the normally susceptible S. albus rendered the bacteria resistant to both antibiotics. Moreover, S. platensis’s FabF had evolved structural changes so as to be resistant to platensimycin, serving as “a second form of self-resistance,” the authors wrote.

Similar self-resistance mechanisms were previously identified in other bacteria—for example, in Pantoea agglomerans, which produces the antimicrobial compound andrimid. “The way the producing bacterium copes with this dilemma is to make its own enzyme resistant to the inhibitor,” microbiologist and biochemist John Cronan at the University of Illinois at Urbana-Champaign, who was not involved in the work, wrote in an e-mail. “[T]his is essentially the same message that the Shen paper reports.”

Whether the findings could inform platensimycin and platencin development efforts remains to be seen, however. “[B]oth compounds have poor pharmacokinetics,” Cronan noted. “They have too high a rate of clearance in the body and gram negative bacteria are resistant due to efflux pumps. . . . As far as the future of these compounds my guess is that they will fail (or have already failed).”

Nevertheless, Shen and his colleagues are hopeful that understanding how S. platensis protects itself will yield insight that could aid the development of platensimycin and platencin.

“Development of resistance in pathogenic bacteria has widely been attributed to horizontal gene transfer from nonpathogenic bacteria with one potential source being antibiotic-producing bacteria that developed highly effective mechanisms to avoid suicide,” the authors wrote in their paper. “Understanding self-resistance mechanisms within [platensimycin] and [platencin] producing organisms therefore is imperative for predicting, determining, and thereby managing, potential resistance that could develop with any future use of [these drugs] or their derivatives in the clinic.”