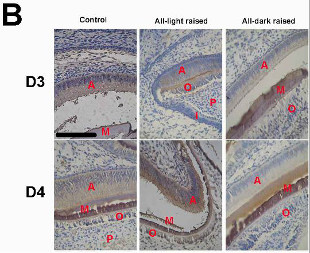 Immunocytochemistry of amelogenins in the first molar tooth germ of mice raised in either night-deprived or daylight-deprived conditions (D3) as well as mice that experienced three-day circadian rhythm derivation followed by one day-night cycle (D4) (40x magnification; scale bar 10μm; A, ameloblast; I, inner enamel epithelium; M, mineralization layer; P, dental papilla cell; O, odontoblast)PLOS ONE, J. TAO ET AL.Melatonin, a hormone found in plants and animals alike, is most often associated with sleep. Secreted by the pineal gland in the human brain, its levels ebb and flow throughout the day, following a circadian rhythm and peaking at nighttime as it alerts the body to the end of the waking day. The hormone has some lesser known effects, too. Namely, in the mouth, where studies in rodents have shown melatonin can do everything from curtail damage caused by periodontitis, a gum disease, to reduce mucositis, the...

In a study published this month (August 5) in PLOS ONE, researchers report evidence to suggest that melatonin is involved in murine tooth development.

Following on a study that identified melatonin receptors in the immature teeth of both mice and humans, scientists at the University of British Columbia, Canada, and the Shanghai Jiao Tong University School of Medicine sought to explore whether circadian rhythms mediated in part by the hormone may have an effect on dental development and health. To do this, they housed three groups of pregnant mice in environments with normal light/dark cycles, constant light, or constant darkness. The scientists then examined the teeth of mouse pups born to these mothers.

“The effects were dramatic,” said study coauthor William Jia, an associate professor of neurosurgery at the University of British Columbia. Jia and colleagues found that the teeth of newborn mice birthed from mothers housed in the all-dark or all-light conditions were immature compared to those of mice whose mothers experienced only normal light/dark cycles. The pups of mothers housed in constant light were particularly affected, the researchers reported.

When pregnant mice housed in normal light/dark conditions were given melatonin receptor blockers, their offspring’s teeth were also underdeveloped. “Morphologically, you don’t see too much change,” said Jia, “but if you look at the ultrastructural level, you do see pathological differences. They’re degenerated.”

Just one day in normal light/dark conditions was enough to partially reverse these effects and allow newborn pups’ tooth development to catch up to those of control offspring, the researchers reported.

Russel Reiter, a professor of cellular and structural biology at the University of Texas Health Science Center in San Antonio, said the results seem significant. “This study is perhaps the most complete study on teeth and the enamel relative to the potential aspects of melatonin,” noted Reiter, who was not involved with the study.

“If the mother’s circadian rhythms aren’t normal, it might affect her baby’s tooth development,” Jia said, inferring that the results in mice might extend to pregnant women.

Reiter said he believes the results could apply to young children, as well. “This is the important time for circadian rhythm development,” he said, “which will affect many things in addition to oral cavity structures.”

Rafael Delgado-Ruiz, an assistant professor at Stony Brook University’s School of Dental Medicine who was not involved in the research explained why rodents like mice are useful for learning about mouth physiology. “They are an inexpensive model, the results are obtained faster compared to other animal models, they are easy to maintain, and the experimental conditions are reproducible,” he told The Scientist.

Commenting on the present study, Delgado-Ruiz pointed out that factors like nutrition, anxiety, and sleep periods, which could affect melatonin actions.

There is much to learn about melatonin receptors found in the mouth. Petros Papagerakis, an assistant professor of orthodontics and pediatric dentistry at the University of Michigan who also was not involved in the work said that he is interested in the effects of clock genes—those whose expression helps regulate circadian rhythms—on tooth development.

Jia said that he and his colleagues plan to examine the long-term effects of circadian rhythm disruption on melatonin and tooth development in mice.