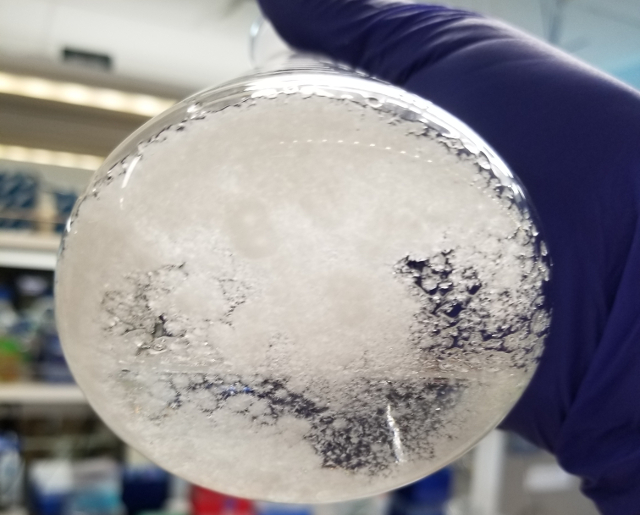 Researchers synthesized some penicillin breakdown products themselves for use in the experiments.TERENCE CROFTSome bacteria take antibiotic resistance a step further: they chow down on the very compounds designed to kill microbes and use them as fuel. Researchers detail today (April 30) in Nature Chemical Biology how some bacteria accomplish this feat, including the genes and enzymes involved in digesting penicillin. They hope the knowledge will eventually be put to work in applications such as breaking down antibiotics in, for example, hospital waste or farm runoff, and constructing novel drug compounds.

“Basically, if you look for it it’s there in when it comes to bacterial degradation of compounds. . . . Somebody out there will degrade just about everything,” says Jo Handelsman, a microbiologist at the University of Wisconsin-Madison. “I don’t think that penicillin-producing strains of Penicillium are absolutely ubiquitous in soil, so it is kind of...

Guatam Dantas, a microbiologist at Washington University in St. Louis, stumbled across the phenomenon of antibiotic-eating bacteria during an earlier study looking for bacteria that can break down toxins, he explains. In that study, his group chose some antibiotics as controls to measure microbes’ responses to compounds they couldn’t eat—or so the researchers thought.

Instead, Dantas was surprised to find that some of the bacteria could, in fact, eat the drugs, and he began asking colleagues to send him soil samples from different places so his team could test for the presence of such microbes. As it turned out, they were everywhere. He also found examples of the phenomenon in the scientific literature going back to the 1960s.

“What has been missing has been any kind of mechanistic elucidation of how this occurs,” he says. So his team set out to deconstruct the steps needed to break down penicillin—selected because it and its derivatives are the largest class of antibiotics—into microbial fuel.

The project ended up taking about a decade, Dantas tells The Scientist, largely because the penicillin-eating microbes aren’t model organisms, and the team had to develop or adapt techniques to knock out certain genes and otherwise manipulate them.

As part of their experiments, the researchers exposed the microbes to one type of partially broken-down penicillin compound at a time to determine the order of steps in the degradation pathway. To do so, they first had to synthesize some of the compounds themselves. Once the researchers thought they’d figured out all the genes involved in the pathway, they transfected them into E. coli and gave them the ability to eat penicillin.

Dantas suggests that, similarly, the genes could be used to specially engineer microbes to break down antibiotic pollutants—for example, in waste from farms where the drugs have been used in livestock or in effluent from hospitals.

The idea of engineering antibiotic-eating bacteria to combat the spread of drug resistance is counterintuitive, but Dantas is cognizant of safety concerns. The gene used in the first step of the pathway, which codes for an enzyme that deactivates penicillin, is the same one already used by penicillin-resistant pathogens, so, he argues, such an approach wouldn’t be introducing new resistance genes to the environment—though he concedes that “you never want to play around with any kind of genetic engineering without very carefully thinking of the risk and what the mitigation strategies might be.” A lower-risk alternative, he says, might be to deploy the bacterial enzymes but not bacteria themselves. 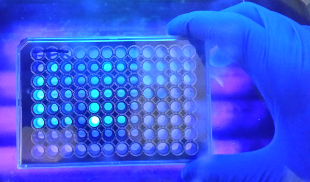 An experiment to detect cleavage of a penicillin product by bacterial enzymesTERENCE CROFTThe idea is “very ambitious,” but such a system would likely be too expensive to make significant headway on cleaning up antibiotics in the environment, says Julian Davies, a microbiologist at the University of British Columbia in Vancouver who was not involved in the study.

Microbiologist Xiaohui Zhou of the University of Connecticut sees promise in putting the enzymes to work making new antibiotics, because they cut existing compounds in predictable places, and the resulting pieces could be mixed and matched to create semi-synthetic drugs.

Now that the methodologies to identify these enzymes and their pathways have been worked out, Dantas says he expects other researchers will be able to begin discovering enzymes and pathways microbes use to break down other types of antibiotics, further adding to the biotechnological tools chemists and biochemists have at their disposal.