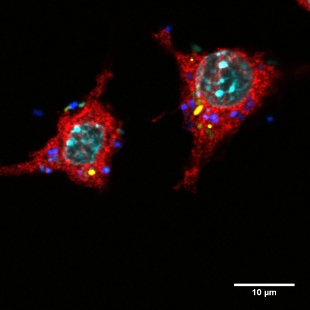 ISABEL GORDOBacteria exposed to antibiotics rapidly acquire mutations that allow them to develop resistance to the drugs, and this process is fairly well understood. Scientists have now looked at the evolution of bacterial resistance toward live agents: cells of the immune system. In a report published in PLOS Pathogens today (December 12), a team led by Isabel Gordo from the Instituto Gulbenkian de Ciência in Oeiras, Portugal, challenged the common human intestinal bacterium Escherichia coli with mouse macrophages—immune system cells that engulf foreign elements like bacteria—and observed the rapid evolution of mutants capable of escaping capture. The same E. coli mutants could successfully establish infections in mice.

“This work on the development of E. coli macrophage resistance and virulence is important,” wrote James Shapiro, a professor of microbiology at the University of Chicago who was not involved in the work, in an e-mail to The Scientist. “It documents...

Although the authors only tested for E. coli virulence for one month, some mutants emerged in as few as four days.

Bacteria have evolved several defences to avoid being internalized by macrophages—sticky outer coverings, formation of filaments and biofilms among them. The evolution of such defences has been studied previously, but not through an evolutionary experiment such as this one performed by Gordo’s team. “I would have thought that the answer goes back 100 years or so, but apparently this is not the case,” Moselio Schaechter, a professor emeritus at the Tufts University School of Medicine in Boston who was not involved in the work told The Scientist in an e-mail. “It’s surprising that this finding has not emerged earlier,” he continued. “It seems like an obvious question to ask.”

The researchers followed the evolution of six E.coli strains, with or without mouse macrophages at a ratio of 1:1. Every 24 hours, the numbers of bacteria were adjusted so that they did not exceed a maximum of ~108. As early as four days into the month-long experiments, two new types of colonies were visible: one that formed smaller colonies than the original strain—termed SCV, for small colony variants—and one that formed large mucoid colonies—dubbed MUC, or mucoid translucid colonies.

“What was amazing was how fast these variants appeared,” said Gordo.

In contrast, the control experiment where no macrophages were used did not show any colony morphology variation even after the full 30 days. The authors found that 30-day-old SCVs outcompeted the ancestral strain when introduced into macrophages and tested after two hours.  However, the advantage was restricted to the early phase of its interaction.

The MUCs, on the other hand, steadily increased in number and eventually took over the entire population in five of the six strains tested. This suggested that the MUCs consisted of mutants that could avoid engulfment. Indeed, upon quantifying E. coli mutants within and outside macrophages in an infection experiment, the authors found significantly fewer MUCs inside macrophages as compared with the same experiment performed on the ancestral strain. The authors then tested the virulence of the MUC strains in vivo by mixing 30 day MUCs from all six evolved lines and introducing them into mice. As expected, mice exposed to MUCs showed significantly reduced survival compared with those exposed to ancestral strains or the control E.coli evolved without macrophages. Curiously, the control strains appeared less virulent than the ancestral ones. Gordo’s team is now pursuing this observation by sequencing the control set. “But the bottom line is that we do not know why [control] strains are less virulent,” she explained.

To understand the basis for the virulence of the MUCs, the authors sequenced sample genomes from each of the six lines, finding that they all had a common mutation—a transposon insertion in the promoter region of a gene called yrfFA. Although this gene has not been characterized in E. coli, its homolog in the closely related bacterium, Salmonella, plays a role in the secretion of colonic acid, which could help explain the increased mucoid nature of the experimental mutant colonies.

Further, each of the clones sequenced showed a range of mutations including in the promoter of a protease called lon, which is known to enhance the overall frequency of mutations in the cell.

“The role of transposable elements in this adaptive response fits with over four decades of research showing mobile DNA to be a major agent of genome change,” said Shapiro.

Ashley Franks, a senior lecturer in the department of microbiology at La Trobe University in Australia pointed out a different angle. Studies like this, she wrote in an email to The Scientist, demonstrate “a medical consequence of what is occurring with genetic rearrangements of the DNA sequence by the microbes themselves.”

Because the mechanism by which this leads to increased virulence in E. coli is not clear, further work is needed to make the leap to what happens in a real infection inside the human body. “Clearly, these experiments are greatly simplified from the real situation in the living organism. However, it is an important step towards a more realistic experimental environment,” Shapiro added.