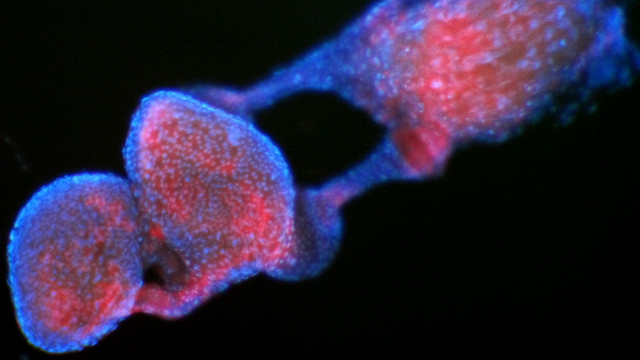 Wolbachia (red) in insect testes (blue)VANDERBILT UNIVERSITY, SETH BORDENSTEINTwo papers published in Nature and Nature Microbiology yesterday (February 27) resolve one of the longest-standing puzzles in entomology: how Wolbachia bacteria cause cytoplasmic incompatibility (CI) in their insect hosts. This strategic sterility, in which bacteria-infected female insects can reproduce readily while uninfected ones struggle, turns out to be regulated by two neighboring bacterial genes that encode interacting proteins. The identification of the genes could aid research into, among other things, Wolbachia-based insect–control strategies.

“It’s really exciting,” said microbiologist Steven Sinkins of the University of Glasgow, U.K., who was not involved in the work. “For Wolbachia researchers this has been the big unanswered question—how the bacteria induce this reproductive manipulation—and this is a convincing breakthrough in terms of identifying the genes that are responsible.”...

Wolbachia bacteria are intracellular parasites that infect approximately two-thirds of the world’s arthropods. Passed onto offspring via infection of the egg, but not sperm, these bacteria have developed a range of reproduction-manipulating mechanisms that ensure their continued prevalence. Chief among these is CI, a phenomenon in which infected males can only successfully reproduce with infected females. Matings with uninfected females result in early embryonic death. In some cases, matings with females carrying a competing Wolbachia strain also fails to yield offspring,

Because CI is such a widespread phenomenon, and because it is employed in strategies to stamp out insect pests—or the diseases they carry—researchers would like to know how it works.

“People have been trying to figure out the molecular mechanisms and the genes responsible for CI . . . for a long time—decades,” said entomologist and epidemiologist Jason Rasgon of Penn State University who also did not participate in the research. “It’s one of the holy grails in the Wolbachia community.”

But it has not been an easy question to answer, explained Seth Bordenstein of Vanderbilt University in Nashville, Tennessee, who led the Nature study. For one thing, he said, the bacteria live inside cells and are “fastidiuous.”

“It’s very difficult to work with these bacteria outside of their host cell environment. You can’t culture them,” he explained, which makes genetic manipulations troublesome.

Instead, it’s been a case of gathering and comparing sequence data from strains that do cause CI and those that don’t. “It’s really taken a decade of genomics,” Bordenstein said.

Such comparisons initially yielded a long list of candidate genes—those shared between CI strains and absent from non-CI strains. But Bordenstein’s team narrowed the list to just two candidates, based on RNA and protein expression data, among other factors. Encouragingly, one of the two genes had previously been identified as a CI candidate.

To test whether the two genes—cifA and cifB—were indeed involved in CI, Bordenstein and colleagues transgenically expressed each one in the testes of uninfected fruit flies and then set up matings with uninfected females. Nothing happened. “We failed completely,” he said. “It was a bust.”

But because the genes lie adjacent to each other within a prophage sequence—a viral sequence incorporated into the bacterium’s genome—“we decided to express the two genes together,” Bordenstein explained. This time, it worked.

In the accompanying Nature Microbiology study, Mark Hochstrasser of the Yale School of Medicine and colleagues also reported the recapitulation of CI by the transgenic expression of these two genes in fruit flies. In their case, the idea to express the genes together was based on evidence that they exist in a single operon (a view that Bordenstein does not share).

Hochstrasser’s team went on to examine the proteins encoded by the genes. They discovered that the two proteins strongly interact with each other and that CidB is a deubiquitinase—an enzyme that removes ubiquitin moieties from proteins. Although the targets of the enzyme are as yet unknown, said Hochstrasser, the deubiquitinase activity was shown to be essential for the CI phenotype in the transgenic flies.

“We’re really at the beginning of understanding how the mechanism of CI works,” he said. “[At least] we now know the players.”

And since lab-generated Wolbachia infections are currently under investigation as pest control strategies, said Sinkins, “understanding how CI works will help that process to be done more efficiently.”