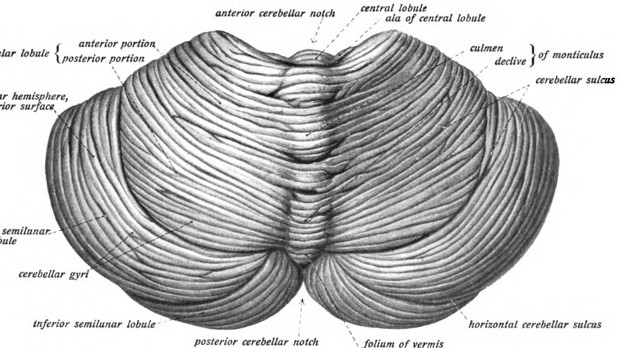 The cerebellumWIKIMEDIA, JOHANNES SOBOTTAExplosions during military combat can initially cause mild traumatic brain injury (TBI), which may lead to later development of neurodegenerative disorders like chronic traumatic encephalopathy and Alzheimer’s disease. What happens when the brain is exposed to blasts has been studied in both military veterans and animal models, yet how blast exposure-related TBI pathologies are connected to the changes observed in neuroimaging studies has not been well understood. According to a study published today (January 13) in Science Translational Medicine, cumulative blast exposure is associated with pronounced alterations in veterans’ brains—notably in the cerebellum, a finding the authors recapitulated in mouse models.

“It can be hard to accurately gauge the amount of blast exposure that soldiers have experienced because that information is self-reported in retrospective designs like the current study,” said Justin Karr, a graduate student in clinical neuropsychology who studies TBI at the...

Even without direct hits from fragmented objects or the force of a head-on collision, prior work has shown that a sudden shock wave of increased atmospheric pressure—called blast overpressure—alone can injure the brain. Researchers at Seattle’s VA Puget Sound Health Care System and University of Washington first examined a cohort of 33 veterans who self-reported experiencing between one and 102 blasts during their military service to test whether increasing detonation exposure was associated with changes in brain metabolism.

The researchers zeroed in on the cerebellum, which has a similar structure in humans and rodents and has been shown to be vulnerable to damage during explosions—both in a prior modeling study and in imaging analyses of the brains of military personnel exposed to explosive blasts. With positron emission tomography (PET) scans, the researchers observed that, with greater numbers of blasts, there was reduced glucose metabolism in the cerebellum of a blast-exposed veteran.

“That the number of blast injuries correlates with a reduction in glucose uptake in parts of the brain is novel and important,” said David Brody, who studies TBI at Washington University School of Medicine in St. Louis and was not involved in the research.

“Glucose metabolism reflects the activity of brain cells and our imaging study here shows that cerebellum cells in these veterans are mot functioning correctly,” said study coauthor Elaine Peskind, a professor of psychiatry and behavioral sciences at the University of Washington. The more blasts study participants reported exposure to, the more chronically suppressed neuronal activity was detected in the cerebellum, explained study coauthor David Cook, an associate professor of pharmacology at the university. And these changes in metabolic activity in the cerebellum did not appear to be linked to other factors, including post-traumatic stress disorder (PTSD), depression, or alcohol use.

Using a mouse model to simulate battlefield-like blasts, the team then showed that tiny leaks in the blood-brain barrier develop in the cerebellum and that there is an increase in phosphorylated tau protein, as well an increase in amyloid precursor protein. There was also increased inflammation in the form of activated astrocytes and macrophages in the brain called microglia.

To Cook’s mind, the findings underscore the importance of studying the role of the cerebellum in TBI.

The effects of decreases in glucose metabolism in the brain are not fully known, Brody noted. “One of the opportunities for future investigation, using the blast animal model, is to correlate the imaging with pathology to understand what the imaging studies actually mean,” he told The Scientist.