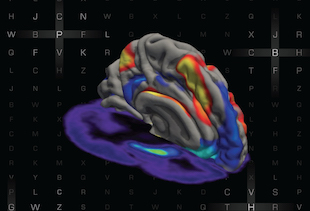 PET-MRI of dopamine receptor density and network functionJOSHUA ROFFMAN MD, MMSCA new study reveals how dopamine contributes to working memory. Using simultaneous positron emission tomography (PET) and functional magnetic resonance imaging (fMRI), scientists have shown that the density of cortical dopamine D1 receptors in healthy individuals is related to a decoupling of the frontoparietal and default networks. The findings, reported by researchers from Massachusetts General Hospital (MGH) in Boston and colleagues today (June 3) in Science Advances, may offer clues to how dopamine signaling becomes disrupted in schizophrenia and other psychiatric disorders.

“The end game is trying to relate [dopamine signaling] back to schizophrenia and other disorders with working memory impairment,” study coauthor Joshua Roffman of MGH and Harvard University told The Scientist.

Dopamine in the prefrontal cortex is known to play an important role in working memory by increasing the activity of brain circuits relevant to...

Recently, Roffman and colleagues developed a method for measuring PET and fMRI simultaneously. “The main question was how variation in cortical dopamine signaling relates to network reorganization during working memory,” he said.

In one experiment, Roffman and colleagues scanned the brains of 100 healthy volunteers using fMRI while the volunteers were resting as well as while they were completing a working memory task. The task involved viewing a series of letters and remembering whether a newly presented letter was part of the set. As in previous studies, the memory task was associated with a decoupling of activity in the FPCN and the DN, with increased activation of the former and decreased activation of the latter.

Next, Roffman’s team conducted simultaneous PET and fMRI imaging on 29 other healthy individuals (three of whom were excluded from the analysis because their scans were stopped early or due to head motion) during the same memory task. To measure dopamine receptor density, the researchers used the PET ligand NNC112, which is specific for D1 receptors; they also gave the volunteers a drug that blocks the ligand from binding to other receptors. The density of D1 receptors in the cortex strongly predicted decoupling between the FPCN and DN when participants were performing the task compared with when they were at rest.

The researchers did not find a link between the dopamine receptor density or network decoupling and working memory performance, however, which they ascribed to the fact that all of the volunteers performed close to perfect on the task.

Roffman’s team found that dopamine D1 receptor density was actually greater in the DN than the FPCN. This suggests that coordination across networks, rather than any one network in particular, is responsible for working memory, Roffman said.

“It’s kind of unexplored territory,” Clifford Cassidy of Columbia University, who was not involved in the study but works with study coauthor Anissa Abi-Dargham, told The Scientist. “People have been exploring [these things] in parallel, but not putting the pieces together.”

Cassidy and Abi-Dargham have done PET and fMRI studies on dopamine receptor density and network connectivity in both healthy individuals and patients with schizophrenia. But in contrast to the present study, “we did see a relationship between [network] coupling and task performance,” Cassidy said.

Some researchers praised the study for having measured PET and fMRI simultaneously, while others were divided on its importance.

“The results of this imaging study fit very nicely with studies of D1 receptor effects on prefrontal neurons in animals performing a working memory task,” Amy Arnsten of Yale University, who was not involved in the study, told The Scientist. “We see that D1 receptors can uncouple networks at the cellular level, weakening network connectivity.”

“Human imaging is very indirect,” said Artnsten. “You’re basically looking at measures of blood flow.” Arnsten and colleagues have previously shown—in nonhuman primates—an inverted U relationship between the number of dopamine receptors and working memory: too many or too few receptors result in cognitive problems.

For the present study, Roffman’s team looked only at dopamine receptors, not at dopamine release, though the latter also plays an important role in cognitive performance, he said. Dopamine signaling varies from person to person based in part on genetics, age, and other factors. Roffman said he hopes to replicate the findings in more varied populations, including older individuals and those with neurological disorders.

Editor’s note (June 3): This article has been updated to include additional comments from Arnsten.