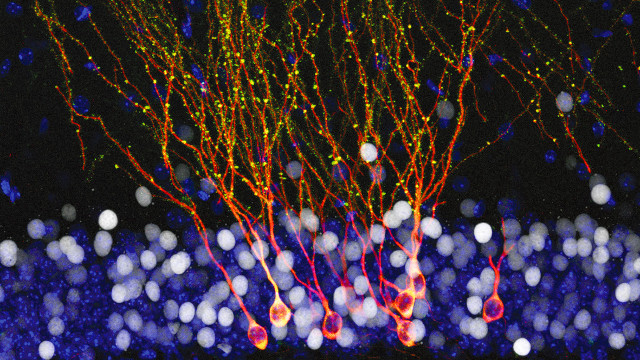 Granule neurons in the mouse dentate gyrusWIKIMEDIA, AVILA, J.Newly made cells in the brains of mice adopt a more complex morphology and connectivity when the animals encounter an unusual environment than if their experiences are run-of-the-mill. Researchers have now figured out just how that happens. According to a study published today (October 27) in Science, a particular type of cell—called an interneuron—in the hippocampus processes the animals’ experiences and subsequently shapes the newly formed neurons.

“We knew that experience shapes the maturation of these new neurons, but what this paper does is it lays out the entire circuit through which that happens,” said Heather Cameron, a neuroscientist at the National Institute of Mental Health in Bethesda who was not involved with the work. “It’s a really nicely done piece of work because they go step-by-step and show all of the cells that are involved and how they’re...

Most of the cells in the adult mammalian brain are mature and don’t divide, but in a few regions, including an area of the hippocampus called the dentate gyrus, neurogenesis occurs. The dentate gyrus is thought to be involved in the formation of new memories. In mice, for instance, exploring novel surroundings electrically activates the dentate gyrus and can affect the production, maturation, and survival of the newly born cells. Now, Alejandro Schinder and his team at the Leloir Institute in Buenos Aires, Argentina, have investigated the process in detail.

Newborn dentate gyrus neurons, which are called granule cells, take six weeks to fully develop and integrate into the mouse brain’s existing neural networks, said Schinder. To examine these cells’ development, the team labeled newborn granule cells with red fluorescent protein in the brains of mice and then either left the animals in their regular cages (controls) or exposed them to enriched environments—cages with tunnels and other unusual objects—for different 48 hour periods. Three weeks after the new cells were labeled, the team examined their morphology and activity.

The researchers found that in animals who had been exposed to the enriched environment during a particular period (9 to 11 days after labeling), the young granule cells had longer dendrites with evidence of increased connections with other neurons. Specifically, these cells had a greater number of dendritic spines, the sites of incoming synapses, and more detectable electrical inputs.

Granule cells receive different inputs from surrounding neurons at different stages of their development, Schinder said, which may explain why they are apparently receptive to experiential input only within a short period (day 9 to 11), rather than throughout their development.

The team went on to analyze these neuronal inputs more closely. Through a series of optogenetic and chemogenetic experiments, the researchers showed that mature granule cells activated their younger counterparts via intermediary cells called interneurons. Artificially stimulating either the mature granule cells or the interneurons could recapitulate the effects of environmental enrichment on the young granule cells. Moreover, the team showed that blocking the activity of the interneurons during the animals’ exposure to enriched environments prevented the expected experience-induced morphology in the young granule cells.

“The take home message is that experience can change how these young cells are incorporating into the brain and how they are contributing to brain circuitry,” said Hongjun Song, who studies neurogenesis at the Johns Hopkins University School of Medicine in Baltimore and who did not participate in the research. But, he asked, “what’s the functional impact? Does this process make the mice better learners? Or if you block the process, do they get worse [at learning]?”

As yet, those questions remain unanswered.