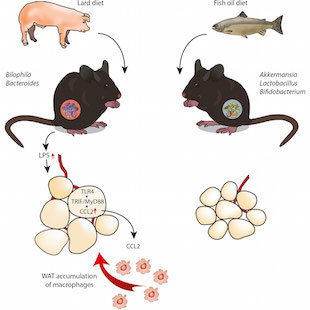 The types of lipids mice consume affect the composition of their gut microbiota, which influences whether the animals develop obesity-related inflammation, according to a study published today (August 27) in Cell Metabolism. Mice fed a high-lard diet for 11 weeks developed signs of metabolic disease, while mice fed fish oil remained healthy. When the researchers transplanted gut microbes from fish oil-fed mice to antibiotic-treated mice and then subsequently fed the animals lard, the mice were protected from the typical unhealthy effects of the saturated fat.

“This paper, which had nicely controlled conditions, demonstrated that type of fat is really important for shaping microbial communities and their functional dynamics, which in turn impact our health,” said Vanessa Leone, a postdoc studying host-microbe interactions at the University of Chicago who was not involved in the study.

“It had been previously shown that switching...

A team led by investigators at the University of Gothenburg in Sweden fed mice diets with the same total number of calories, but some mice received nearly all their fat intake from fish oil, while others received large amounts of lard. As expected, the lard-fed mice gained more weight than their fish oil-fed counterparts. The lard-fed mice also developed signs of metabolic disease, including insulin sensitivity and high blood-insulin and -glucose levels, even after fasting.

The lard-fed mice showed elevated levels of Bilophila, Turicibacter, and Bacteroides in their guts, while the fish oil-fed mice had unusually high levels of members of such groups as lactic acid bacteria, Actinobacteria, and Verrucomicrobia—a group containing Akkermansia, which has previously been associated with good metabolic health.

The researchers next set out to determine whether the microbial changes they observed might be related to the metabolic difficulties of the lard-fed mice, and the comparative good health of the fish oil-fed animals. Metabolic disease is associated with overactive innate immunity leading to inflammation in fat cells. This inflammatory response includes activation of toll-like receptors (TLRs). The researchers found that blood serum isolated from lard-fed mice activated TLR4.

When the researchers compared the effects of different types of fats on germ-free mice versus mice with a normal population of microbes, they found that the mice with microbes showed greater differences in inflammation levels depending on what types of fat they ate than did their microbe-free counterparts. This suggested that gut microbes do mediate the effects of the different types of fats. However, even germ-free mice did show signs of negative health effects when they ate saturated fats in place of fish oil, hinting that these fats have some influence independent of microbial population.

“We know that fat itself can act as inflammatory inducers in certain immune cells, we can’t ignore that fact,” said Leone. “It’s just that diet-induce microbes also play a role and they together work to increase that inflammation even higher and make it even worse.”

When the researchers exposed murine fat cells to serum collected from lard-fed mice with a full complement of microbiota, they found that expression of a gene encoding the inflammatory protein CCL2 increased. This protein recruits macrophages to the area.

“If we take mice and feed them lard diets and then we treat them with microbiota from fish-oil fed mice we can prevent obesity,” said study coauthor Fredrik Bäckhed, a professor at Gothenburg. “For me, that’s really cool, because it means that the shift in the microbiota actually matters.”

“While it is clear that [TLR] signaling . . . was an important aspect of how the lard-based diet induced the increased inflammation (consistent with other reports), the exact molecules induced by the lard-based diet that are responsible for TLR activation were not characterized,” Davies told The Scientist.

Bäckhed and his colleagues searched for signs of whole microbes in the blood and fat tissues of the mice but found few, so it is unlikely the microbes leave the gut and directly interact with fat tissues. Rather, the researchers proposed, these microbes secrete metabolites that can travel through the blood and induce inflammation.

It also remains to be seen whether these findings apply to people. “It will be important to confirm these findings in humans using long-term dietary interventions wherein food intake is carefully controlled coupled to metabolic and immune profiling,” Peter Turnbaugh, a professor of microbiology and immunology at the University of California, San Francisco, wrote in an email.

But dietary interventions can be difficult to control. Mice “have better compliance to the diet we give them,” Bäckhed said. “It would hard to have humans eating a diet with fish oil for breakfast, lunch, and dinner every day.”