Hyperthermia is occasionally used to augment the efficacy of certain cancer therapies, but how heat helps has been a mystery. Now, researchers have uncovered the details of one likely mechanism -- heating a tumor inhibits homologous recombination, a DNA repair system, so cancer cells cannot mend DNA damaged by radiation or chemotherapy. The finding, linkurl:published today;http://www.pnas.org/cgi/doi/10.1073/pnas.1101053108 in Proceedings of the National Academy of Sciences, suggests that the addition of heat may expand the use of promising cancer drugs targeted to cells defective in homologous recombination."The findings reported are very important," said linkurl:George Iliakis,;http://www.uni-due.de/radiation-biology/iliakis.shtml who studies cellular responses to DNA damage at the University of Duisburg-Essen Medical School and was not involved in the research, in an email to The Scientist. If confirmed with future tests, he added, "they promise to revive the field of hyperthermic oncology -- a field of oncology that has been nearly forgotten." Hyperthermia used in conjunction with radiation treatments made a splash in the 1970s and 1980s, appearing to somehow inhibit tumor cells' ability to repair its DNA and fix damage done by radiation and chemotherapy, which are designed to cause enough DNA damage to kill a cell. But subsequent clinical trials failed to demonstrate the effectiveness of the combination treatment, and over time, competing approaches stepped in to the limelight. Today, with improved instrumentation to heat defined areas of the body to desired temperatures and a recent linkurl:positive phase III clinical trial,;http://www.ncbi.nlm.nih.gov/pubmed/20434400 interest in the field is renewed.linkurl:Roland Kanaar,;http://web.mac.com/carolwymanmac/Site/Roland_Kanaar.html Jacob Aten and colleagues at Erasmus Medical Center and the Academic Medical Center in the Netherlands screened mouse embryonic stem cells with defects in various DNA repair pathways and tested for effects of hyperthermia. They found that heating cells to 41-43 degrees Celsius (106-109 degrees Fahrenheit) blocked homologous recombination, a method of restoring DNA breaks, by degrading BRCA2, a protein essential for the repair pathway. The finding may have immediate applications in cancer therapeutics. "It's simple, but it has big implications," says Kanaar. BRCA2 is mutated in some cases of hereditary breast cancer, causing homologous recombination to malfunction. A new type of drug called PARP inhibitors, currently in clinical trials, targets and kills tumors cells with defective homologous recombination in these patients. If hyperthermia can be used to inhibit homologous recombination in a range of tumors, PARP inhibitors -- which have are well-tolerated with fewer side effects than traditional chemotherapy, says Kanaar -- may be more widely applicable in oncology. "We [wouldn't] need to depend on rare genetic mutations to treat a tumor with PARP inhibitors," Kanaar said. Still, additional mechanisms likely contribute to the effect of hyperthermia on tumors. "Heat will do a lot of things to cells," says Kanaar. "We're not claiming [degrading] BRCA2 or inhibiting homologous recombination is the only thing that hyperthermia does." Krawczyk, P.M., et al., "Mild hyperthermia inhibits homologous recombination, induces BRCA2 degradation, and sensitizes cancer cells to poly (ADP-ribose) polymerase-1 inhibition," PNAS, doi: 10.1073/pnas.1101053108, 2011.
**__Related stories:__***linkurl:Opinion: Can viruses kill cancer?;http://www.the-scientist.com/news/display/57917/
[19th January 2011] *linkurl:Sweet relief;http://www.the-scientist.com/article/display/57167/
[1st March 2010] *linkurl:Heating up gene activation;http://www.the-scientist.com/news/display/55344/
[19th January 2009]
Related Articles 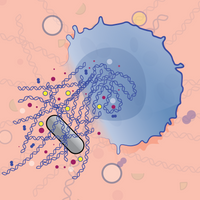