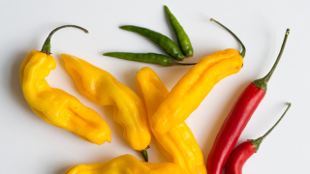 WIKIMEDIA, TAKEAWAYCapsaicin—a substance in chili pepper plants that makes them spicy hot—exerts its pain-attenuating effects by triggering a signaling cascade that results in the inactivation of mechano-sensitive transmembrane channels in neurons, according to a study published this week (February 10) in Science Signaling.

Initially causing a burning hot sensation, the compound is used as a topical pain medication because, when applied regularly, results in numbness to local tissue. Despite being widely used, researchers have previously not known how capsaicin exerts its pain-killing effects.

The initial pain-dulling sensation occurs when capsaicin activates heat-sensing transient receptor potential vanilloid 1 (TRPV1) ion channels on sensory neurons. Prolonged stimulation with the compound results in desensitization of these neurons. “This is one of the underlying mechanisms of capsaicin’s numbing effect, but TRPV1 is a heat sensor, so how it affects mechanical pain was not known,” said Tibor Rohacs, an associate professor of...

Rohacs and his colleagues uncovered a link between the heat-stimulating function of capsaicin and its ability to relieve mechanical pain including neuralgia (pain from damaged nerves), neuropathy, and muscle and joint pain. Capsaicin’s activation of TRPV1 ion channels in turns inhibits mechanical force-sensing ion channels called Piezo1 and 2 by depleting phospholipid signaling molecules, phosphoinositides, in the cell membrane.

“What is unique in this study is how one kind of channel regulates the activity of another,” said Tamas Balla, a signal transduction researcher at the National Institutes of Health who previously collaborated with Rohacs but was not part of the current study. “I believe that this is the first example of ion channel cross-talk mediated by phospholipids,” Balla added.

“The work is very thorough and cutting-edge,” Mario Rebecchi, an anesthesiology and biophysics researcher at Stony Brook University in New York, told The Scientist in an e-mail.

Dorsal root ganglion (DRG) neurons perceive pain and are often used to study mechanically stimulated ion channels, also found in peripheral neurons of the skin. Using DRG neurons isolated from mice, Rohacs and his colleagues first found capsaicin able to inhibit mechanically activated currents in these cells. The researchers then expressed TRPV1 along with either the mechanically stimulated Piezo 1 or 2 ion channel in human embryonic kidney cells. The expression of TRPV1 was necessary for capsaicin to inhibit the activity of the Piezo channels. “What was really striking was that the inhibition [of the Piezo mechnosensitive channels] was almost 100 percent,” said Rohacs.

TRPV1 activation increases intracellular calcium ion levels, which then activate phospholipase C (PLC) enzymes to break down phosphoinositides. Adding two of the most abundant types of phosphoinositides into the solution of DRG neurons in vitro resulted in less inhibition of Piezo ion channel signaling, suggesting that these lipids are required to relay the signal from TRPV1 to the mechanically stimulated Piezo channels.

To show that the depletion of phosphoinositides inhibits the Piezo ion channels, and that other calcium-signaling dependent pathways are not involved, the team bypassed PLC signaling by expressing a phosphatase that also breaks down the membrane phosphoinositides but does not result in downstream signaling effects. This direct depletion of phosphoinositides also resulted in the block of Piezo channel activity. Further in vitro experiments showed that it is the PLC delta isoform that is necessary to dampen the mechanically stimulated ion channels (rather than the beta version). Typically, PLC beta signals through G protein-coupled receptors while PLC delta signals by activating calcium ions.

“This work links how a chemical stimulus can indirectly influence a mechanical process, at least at the cellular level,” Philip Gottlieb, a biophysics researcher at the University of Buffalo in New York who was not involved in the work, told The Scientist in an e-mail. “The supposition is that mechanically induced pain can be affected by a chemical that is known to activate the TRPV1 [ion channel yet appears] unrelated to the mechanically induced response.”

Still, to Rebecchi’s mind, “it is a huge leap to go from channel activities in an artificial heterologous expression model in vitro to sensation of pain.” Gottleib agreed: “There remain many questions including how this will play out in animal models.”

One question is how inflammation is coordinated with pain perception and sensitivity. Balla said he would like to see how this pain-perceiving neuronal pathway interacts with inflammatory signaling molecules like bradykinin, an inflammation-mediating peptide that indirectly activates TRPV1 ion channels. This would help researchers better “understand the key players acting in concert in pain perception,” said Balla.