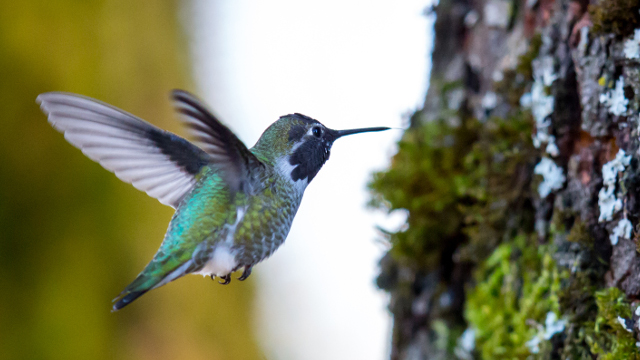 Anna's hummingbirdFLICKR, MICK THOMPSONHummingbirds are efficient hoverers, suspending their bodies midair using rapid forward and backward strokes. Aside from their unique ability to hover, the tiny avians are also the only known birds that can fly in any direction, including sideways. Hummingbird brains appear to be adapted for this flying ability, researchers have now shown. According to a study published today (January 5) in Current Biology, a highly conserved area of the brain—the lentiformis mesencephali (LM), which receives panoramic visual motion information directly from the retina—processes the movement of objects from all directions. In contrast, the LMs of other bird species and all other four-limbed vertebrates studied to date predominantly sense back-to-front motion.

While the authors had predicted the neurons of this hummingbird brain region would be tuned to slow motion, they in fact found the opposite: LM neurons were sensitive to quick visual motion, most...

“This ancient part of the brain the authors studied has one job: to detect the motion of the image in front of the eyes,” explained Michael Ibbotson, a neuroscientist at the University of Melbourne who penned an accompanying editorial but was not involved in the research. The results of this study suggest that “hummingbirds evolved this area of the brain to have fine motor control to be able to hover and push in every direction possible,” Ibbotson said.

“The authors show that the LM of hummingbirds contains neurons tuned to almost any direction of motion, which goes against previous assumptions, and which should certainly relate to the particular high demands of this bird’s flight maneuvers,” Gonzalo Marin, who studies avian vision at the University of Chile in Santiago and was also not involved in the work, wrote in an email to The Scientist.

In a 2007 anatomical study, researchers at the University of Alberta in Canada showed that the LM of a hummingbird is proportionally larger compared to the same brain region in other bird species. “What’s remarkable about the enlargement is that this is a brain region that has some very basic and fundamental functions and we generally do not consider highly conserved brain regions like this to vary so much in size across species,” said Andrew Iwaniuk, a coauthor on the anatomical study who is now at the University of Lethbridge in Canada but was not involved in this latest work.

To study the function of the LM in hummingbirds, study coauthor Andrea Gaede, a postdoctoral fellow in Douglas Altshuler’s laboratory at the University of British Columbia, Canada, and colleagues recorded the activities of LM neurons of six Anna’s hummingbirds (Calypte anna) and 10 zebra finches (Taeniopygia guttata) while the anesthetized avians were shown hundreds of 2-D dots moving in unison on a screen. Gaede’s team compared those data with similar information generated from a study on pigeons (Columba livia domestica).

The researchers exposed the birds to moving dots in eight different directions for five seconds each, identifying the directional preferences of active LM neurons. They then tested whether the neurons responded to fast or slow movement, both in their preferred direction and in the opposite direction. The team found that most pigeon and zebra finch LM neurons spontaneously fired when the dot field moved forward and were inhibited when the dot field moved backward. In hummingbirds, LM neurons were excited by motion in a single direction, but that direction could have been any one of the eight tested, Gaede explained. The researchers also found that 80 percent of the hummingbird LM neurons examined responded to quick visual movement.

“As a comparative biologist I think it’s really cool that someone followed up the anatomical study I did and actually showed that the physiology backs up the anatomy,” said Iwaniuk.

“Hummingbirds have a massive enlargement of the LM that is also associated with this improved ability to detect global motion. These LM cells are tuned to forward motion in other vertebrates, but in hummingbirds, these neurons are responsive to motions in any direction,” he added. “When you think about hummingbird flight, this makes complete sense, because you have an animal that floats in the air in the same way that a fish swims in water, basically.”

Gaede said her team would next like to understand how the hummingbird brain processes visual information and translates it into motor outputs mid-flight. The technical challenge now will be probing LM neurons in awake, moving animals, she noted.

To Marin’s mind, the work tied into the broader question of how visual systems control body posture while navigating an environment. “Normally one thinks of vision as a system dedicated to detect and react to visual objects, but in fact one of the most ancient visual functions is to stabilize the body with respect to the environment,” he wrote, “especially to stabilize the gaze itself.”