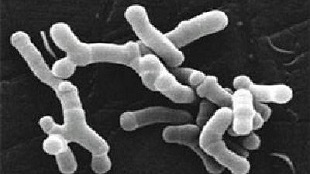 WIKIMEDIA, JULIE6301The gut microbiomes of young children don’t fully recover from the trauma of early-life malnourishment, even after they are treated with more-complete diets, according to a study published today (June 4) in Nature. A team led by Jeffrey Gordon of the Washington University in St. Louis sampled the gut microbiomes of healthy and malnourished children in Bangladesh and found that the microbiomes of children who were underfed and whose diets lacked essential nutrients looked less like those of adults and more like those of younger, healthy children.

“This is actually a real step forward in terms of having a technique to look at development of the microbiome in children,” said Josef Neu, a pediatrician at the University of Florida who studies gastrointestinal health of neonates and was not involved in the work.

The findings present a possible explanation for the commonly observed complications that malnourished children...

“These children are walking around with an immature organ and that immaturity may not be compatible with healthy growth,” said Gordon.

The researchers collected monthly fecal samples from a dozen healthy children in Mirpur—an impoverished region in the city of Dhaka—for the first two years of their lives. By the time they are toddlers, most children develop gut microbiomes that are similar to those of adults. The researchers used 16S ribosomal sequencing to identify bacterial taxa in the children’s fecal samples, narrowed the results down to 24 key taxa, and created a mathematical model to analyze the data. They then applied that model to 38 other healthy children and used the results to develop two measurement tools, which the researchers labeled “relative microbiota maturity” and “microbiota-for-age Z-score,” explained coauthor Sathish Subramanian, a graduate student  in the Gordon lab.

The researchers used these measurements to refine the model, and then applied the model to study the microbiomes of 64 severely malnourished children before, during, and after they were assigned to one of two diets meant to treat malnutrition. The first was a standardized, ready-to-use therapeutic food called Plumpy’nut—a peanut-based treatment for malnutrition that is widely used by non-governmental organizations around the world. The other diet consisted of low-cost, locally produced calorie-rich foods, khichuri and halwa. Children in both treatment groups gained the same amount of weight post-treatment, but they remained underweight and fell short of typical height measurements.

The team found that before and immediately after treatment, the gut microbiomes of children in both malnourished groups were immature compared to healthy controls. After a month, the children’s microbiomes improved dramatically, but that improvement did not last for more than a few months. At four months, the microbiomes of both malnourished groups appeared to regress to a less-mature state, and the microbes in their guts were less diverse than were those collected from healthy children.

The findings show “a persistent delay in maturation of this organ in malnourished children,” Gordon said. “If we are to repair the dysfunction associated with malnutrition, we’re going to have to look not only to our human cellular parts, but also to our microbial parts.”

The researchers repeated the experiment in a group of healthy children from Malawi and found a similar maturation and shift in gut microbes as the children grew older. However, Neu noted, the findings of the current study are not yet generalizable to populations in other parts of the world. But he believes the technique that Gordon, Subramanian, and their colleagues’ work could inspire a tool to compare interventions that may influence the makeup of a child’s gut microbiome.

The team is now studying the microbiota of children in several countries, including South Africa, Brazil, and Peru. The researchers hope the results bolster their initial findings from Bangladesh and Malawi in the coming months. These studies are part of a larger effort to develop bacteria-mediated interventions that can restore gut microbiome function in malnourished children. Gordon noted that there may be windows of opportunity to rebalance the gut microbiota early on, raising the possibility of reducing some of the lingering effects of early childhood malnutrition.