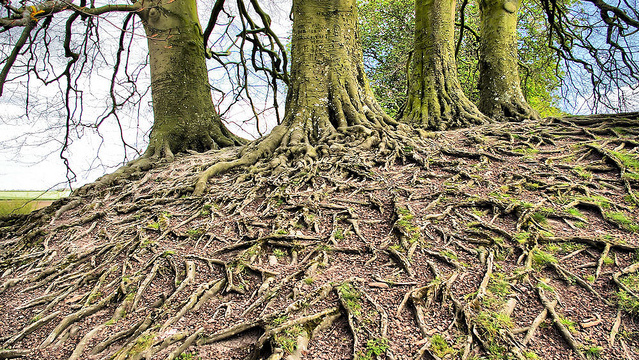 FLICKR, GORDON ROBERTSONPlant-soil feedback is the idea that as plants grow in soil, they change the soil, and that the soil in turn affects their growth. When the soil surrounding a given plant promotes the growth of conspecific plants, plant-soil feedback is positive. But when the soil discourages the growth of conspecific plants, the feedback is negative. In independent studies published in Science today (January 12), researchers examined how mycorrhizal fungi—which live in and around plant roots and help plants gather nutrients—affect plant population diversity.

Both groups used greenhouse experiments to model plant-soil feedback, examining plants with different microbial symbioses and nutrient-gathering strategies. François Teste of the University of Western Australia and IMASL-CONICET/UNSL in San Luis, Argentina, and colleagues used their resulting data to predict how plant-soil feedback relationships might affect plant diversity in the long run. Meantime, Jonathan Bennett of the University of British Columbia, Canada, and colleagues...

“The take-home message is that these below-ground mechanisms—which, in general, we call the plant-soil feedback mechanism—[are] important in driving local plant diversity,” Teste told The Scientist.

“We knew before . . . that there is a range in direction in strength of feedback,” ecologist Justine Karst of the University of Alberta in Canada, who was not involved in either study but has previously collaborated with Teste and Bennett, told The Scientist. “What’s new is that [this feedback] varies by mycorrhizal type specifically and, kind of more generally, [plant] nutrient-acquisition strategy.”

Working in an ecologically diverse scrubland in Southwest Australia, Teste’s team gathered soil surrounding plants that gather nutrients using different strategies: symbiosis with nitrogen-fixing bacteria, symbiosis with one of three types of mycorrhizal fungi, and nutrient uptake without microbial mediation via lateral root branches. Next, the researchers mixed and matched species of plants with different nutrient-acquisition strategies in soil gathered from around plants of these different types. To test for feedback, they grew each species in soil gathered from under plants of the same or a different species in a greenhouse. At the same time, they also grew each species in soils gathered from plants that either use the same or different nutrient-gathering strategies. After nine months, the researchers measured and compared plant growth (by weight) across all groups. From those greenhouse experiment data, the team then simulated plant-soil interactions in a long-term field experiment.

The group found that nitrogen-fixing and nonmycorrhizal cluster-rooted plants exhibited negative plant-soil feedback: these specimens grew more in soil from other species than in their own. On the other hand, ectomycorrhizal (EM) plants exhibited strong positive feedback.

The case of arbuscular mycorrhizal (AM) plants is more complicated. Considering feedback as a comparison of growth in conspecific or heterospecific soil, AM plants exhibited neutral feedback. Considering feedback a comparison of plant growth in a species’ own soil or sterile soil, AM plants exhibited positive feedback, Teste explained. (Indeed, the plants grew better in their own soil than in sterilized soil, suggesting that arbuscular mycorrhizae promoted growth, a signal of positive feedback, Teste said.)

The researchers used their simulation data to predict how different combinations of soil microbes might affect plant population diversity, finding that a mixture of conspecific and heterospecific soil led to the greatest variation overall. In their paper, the authors pointed out that this finding does not fit the theory that plant population diversity arises through negative feedback. That is, if one plant species dominates a region, that area will be burdened by species-specific pathogens, which are likely to quell future growth of that species and, therefore, promote population diversity.

Over in North America, Bennett’s team examined plant-soil feedback in populations of trees that use AM and EM nutrient-gathering strategies. The team collected soil and tree samples from 550 locations across the U.S. and parts of Canada. In the lab, the researchers tested whether species grew better in their own soil or in the soil that surrounded other species. Like Teste’s group, Bennett’s team found that EM plants exhibited positive feedback. However, Bennett and colleagues found that AM plants exhibited negative feedback. “Is this an outcome of . . . sample size, or is this something about location?” Karst asked, commenting on these conflicting results.

Bennett and colleagues next explored whether these plant-soil feedbacks would translate to the field. Would conspecifics be more likely to grow around EM trees and less likely to flourish around AM trees? To find out, researchers first defined an AM or EM tree as the focal species (“Species X”) and then counted the number of conspecific saplings that grew beneath the tree’s canopy. They then counted the number of saplings of Species X growing under a nearby heterospecific tree, comparing the two values. The researchers repeated this process for five EM tree species and five AM tree species, 10 populations per species. As expected, the growth of a given EM species around conspecific trees was 40 percent greater than its growth around heterospecific trees, while the growth of a given AM species was reduced by 30 percent near conspecific trees in comparison to its growth around heterospecific trees.

Part of “understanding the underlying mechanisms that drive these differences in plant-soil feedback . . . will be to identify the players,” said Karst. “In both of these papers, we don’t know the identity of the microbes that were present in the soils or colonizing these roots. . . . Ultimately, we want to also look at that microbial community and see who’s there.”

Bennett agreed. “There exists some variation within these groups [of plants] that isn’t just explained by mycorrhizal type,” he said, noting that occasionally EM and AM species within the study had feedback that was neutral or even contrary to the trend for their mycorrhizal group. “Going forward, what I’d like to do is explain more of this variation, because understanding more of that variation will make it a lot easier for us to understand and predict how plants respond to soils and how populations may change as the environment changes.”