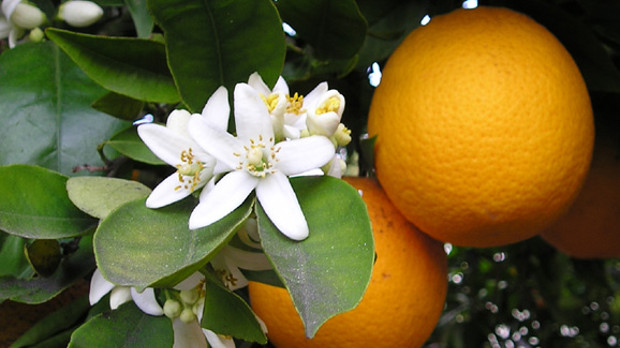 Citrus sinensis produces caffeine in its flowersWIKIMEDIA, ELLEN LEVY FINCHPlant species belonging to divergent branches of the evolutionary tree are known to have independently evolved caffeine production. According to scientists at Western Michigan University, caffeine-producing plants have taken a number of different biochemical routes to synthesize the stimulant. Coffee, tea, cocoa, orange, and guaraná plants make caffeine using an array of enzymes and substrates, the researchers reported in PNAS this week (September 20).

“This is a very nice article that illustrates the multiplicity of adaptive pathways utilized in biochemical evolution,” said evolutionary biologist Michael Clegg of the University of California, Irvine, who was not involved in the study.

Caffeine is produced by approximately 30 of the world’s 300,000 or so different species of flowering plants, estimated Todd Barkman of Western Michigan, who led the new study. The divergent nature of these species and of the functions the molecule...

Indeed, studies have shown that coffee (Coffea arabica) and tea (Camellia sinensis) use different enzymes to generate caffeine—xanthine methyltransferases (XMT) and caffeine synthases (CS), respectively. Furthermore, comparisons of the coffee genome (Coffea canephora) to genes from cocoa (Theobroma cacao) and tea have provided genetic confirmation of the convergent rather than divergent evolution of caffeine production.

To gain insight into the similarities and differences of caffeine production across the plant kingdom and to examine its convergent evolution, Barkman and colleagues have compared the process in tea and coffee to three additional flowering species: cocoa, guaraná (Paullinia cupana), and orange (Citrus sinensis).

Despite utilizing different enzymes, coffee and tea plants make caffeine via the same biochemical steps: methylation of the nucleoside xanthosine, followed by two further methylation steps to make caffeine. Barkman and colleagues therefore surmised that cocoa, guaraná, and orange would use the same steps. They isolated and assayed candidate XMT enzymes from orange and CS enzymes from guaraná and cocoa, but, to the researchers’ dismay, they found that the proteins would not catalyze the reactions.

“We were certainly expecting these plants to use the same biochemical pathways that coffee and tea use because for 30 years that’s been the caffeine pathway in plants,” said Barkman. “I have to tell you, we wasted a year trying to force those enzymes to make caffeine the same way all plants supposedly do it.”

Possibly out of desperation, Barkman considered that the enzymes might utilize alternative substrates. “For every enzyme we tested every possible substrate related to the caffeine biosynthetic network,” he told The Scientist. And, at last, the experiments worked. “We all just jumped for joy,” said Barkman.

It turned out that while the tea and coffee pathways begin with xanthosine, the other plants studied make use of a similar molecule, called xanthine. Some or all of the intermediate molecules in the pathways also differed in cocoa, orange, and guaraná plant caffeine synthesis.

“It really illustrates the idiosyncratic nature of how selection can pick and choose,” Barkman said.

The team went on to investigate how the enzymes might have evolved, focusing on the XMT enzyme from the Citrus lineage. By comparing the sequences of orthologous XMTs from approximately 500 other flowering species, and by calculating probabilities of amino acid substitutions over millions of years, the researchers recreated putative ancestral enzymes and tested them in biochemical assays.

They found that the earliest synthetic ancestor, which the Citrus lineage would have shared with coffee, could methylate benzoic acid and salicylic acid (carboxylic acids involved in floral scent, pathogen defense, and more), but could not methylate xanthine or xanthosine. A more recent synthetic Citrus XMT ancestor, however, could utilize both salicylic acid and xanthine, the team found.

“The innovation here is with the resurrection of the ancestral enzymes,” said evolutionary plant biologist Jim Leebens-Mack of the University of Georgia. “[The authors] did a wonderful job of demonstrating a very plausible path toward convergence.”

The resurrected ancestor enzymes provide insight into “how evolution works,” Leebens-Mack said, but “also give us an idea how bioengineers may modify existing genes to take on new functions.”

“It’s not just a matter of describing what’s happened in the past,” he added, “it’s about giving us an idea of what is possible in the future.”