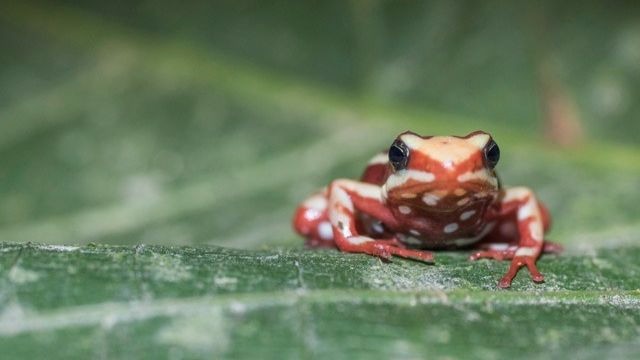 The phantasmal poison frog, Epipedobates anthonyi, is the original source of epibatidine, discovered by John Daly in 1974. In fact, epibatidine is named for frogs of this genus. Epibatidine has not been found in any animal outside of Ecuador, and its ultimate source, proposed to be an arthropod, remains unknown. This frog was captured at a banana plantation in the Azuay province in southern Ecuador in August 2017.REBECCA TARVIN

Poison frogs become poisonous by isolating chemicals from their food and storing them in their skin. One such compound, epibatidine, is a stronger painkiller than morphine, but has not been tested in humans because even low doses are deadly to rodents. But for the frogs themselves, this powerful neurotoxin is totally impotent.

According to a study published today (September 21) in Science, several groups of epibatidine-bearing frogs have independently evolved amino acid changes in the toxin’s target, the...

The authors “show DNA sequence changes [and] amino acid sequence changes that have happened multiple times in multiple lineages of frogs,” says Joel McGlothin, an evolutionary biologist at Virginia Tech who was not involved in the work. “Not only are they able to show these evolutionary changes, they show what the consequences are.”

Other animal species, including some insects, newts, and puffer fish, have evolved resistance to toxins—self or otherwise—by amino acid replacement. “Poison frogs are a great study system for understanding how toxicity evolves because chemical defenses have actually evolved four different times in the group,” coauthor Rebecca Tarvin, an evolutionary biologist and postdoc at the University of Texas at Austin, tells The Scientist. 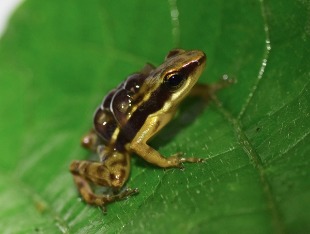 A male Machalilla rocket frog, Epipedobates machalilla, is loaded up with his young tadpoles. Males of this genus carry tadpoles from where they were laid to small pools of water, where they will complete their development into tiny poison frogs. Photographed in Cotopaxi Province, Ecuador, in August 2017.REBECCA TARVINTarvin and colleagues hypothesized that frogs that use epibatidine to ward off predators would have changes in their nicotinic acetylcholine receptors that make them less sensitive to the toxin, but normally responsive to acetylcholine. “If you’re going to cover yourself in a neurotoxin, you have to reorganize how your nervous system works,” she explains.

To understand the functional consequences of these alterations, the researchers mutated the sequence of the human nicotinic acetylcholine receptor to reflect the amino acid replacements observed in the poison frog, either one mutation at a time or in combination. They also mutated the frog receptor to resemble the human receptor.

The team injected these constructs into Xenopus oocytes (a non-poisonous frog), and used electrophysiology to assess the responses of the oocytes to epibatidine and acetylcholine. They observed a range of sensitivity to the ligands depending on the receptor.

“The pattern that emerged was that there was a single substitution responsible for the epibatidine resistance that was present in all three clades,” says coauthor Cecilia Borghese, a neuroscientist and research associate at the University of Texas at Austin. But “that insensitivity to epibatidine came at a cost,” she adds.

Borghese, Tarvin, and colleagues found that the single amino acid change common to all the poison frogs made the receptor less sensitive to the toxin, yet also rendered it less responsive to acetylcholine, its endogenous ligand. But the different combinations of additional amino acid substitutions observed in two of the groups of poison frogs recovered the receptor’s function, suggesting that these mutations compensate for the cost associated with avoiding self-poisoning. 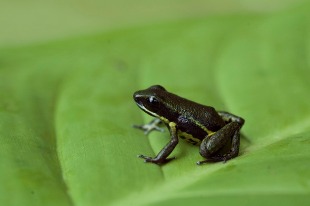 Recently described in 2008, the Narino poison frog, Epipedobates narinensis, inhabits humid subtropical forests of southwestern Colombia. Like the little devil poison frog, it is threatened by habitat destruction. Photographed in the Reserva Natural Biotopo Selva Humeda, Narino Department, Colombia in September 2016.REBECCA TARVIN“They’ve done a really nice job of highlighting that there are multiple routes to adaptation,” Michael Pfrender, an evolutionary biologist at the University of Notre Dame who did not participate in the study, tells The Scientist. “The intriguing thing that they show that they don’t really solve is that when they put these mutations in a human background or in the frog background, they behave somewhat differently. That’s one of the unresolved questions: how much does genetic background play a role in what mutations are effective?”

Another open question centers on the order in which these mutations arose, says University of Virginia evolutionary biologist Edmund Brodie III, who was not involved in the work. “It’s a reasonable conclusion that frogs evolved this resistance first and then [made] compensatory changes afterwards. The alternative—and it’s also plausible from their data—is that evolution proceeds with some permissive changes, so the first adaptive or progressive change wouldn’t have as big a cost.”

McGlothlin highlights the consequences that the poison frogs’ evolutionary changes could have for other organisms. “The fact that evolution can get you to that point where you are resistant to your own toxin suggests that probably your predators might be able to eventually get to that point as well,” he says. “I don’t know if there are any snakes out there that are stupid enough to eat these frogs, but if there are I would like to know what these genes look like in the snakes.”

Tarvin plans to explore many of these questions as she investigates the broader evolutionary processes underlying the transition from not having chemical defenses to being able to acquire, accumulate, and sequester compounds from the environment. “Once an organism is chemically defended, their interactions with their predators change; their behavior changes,” she says. “It can have huge evolutionary consequences.”