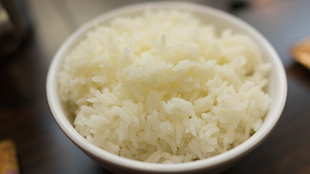 CHARLES HAYNES, FLICKRRice (Oryza sativa) is a staple crop for half of the world’s population, but it can accumulate high levels of arsenic. When consumed over time, arsenic can lead to cancer and skin lesions. But the plant has its own mechanisms for fighting arsenic accumulation, according to a paper published today (October 20) in PNAS. Researchers based in Korea and Japan have shown that a rice transporter protein called OsABCC1 prevents arsenic from damaging plant tissues by sequestering the element in vacuoles. Because of this, potentially harmful arsenic remains in these cellular waste containers rather than building up in rice grains.

“What they have shown in this paper is really quite impressive,” said Andy Meharg, chair of plant and soil science at Queen’s University Belfast in the U.K. “The difference between having these ABC transporters and not having them is very, very large.”

Rice accumulates arsenic both because of its growing conditions and biology. The crop is often grown in flooded rice paddy fields, where arsenic becomes arsenite, a compound that bears a strong chemical resemblance to silicic acid. The rice plants take up the silicic acid through transporters in their roots. Silicon makes rice plants stiff and sharp, allowing them to remain upright in damp conditions and to ward off pests. But while rice is getting its needed dose of silicon, it’s accidentally drinking up arsenite. Arsenic is also found as arsenate, which mimics the key nutrient phosphate.

Arsenic toxicity is particularly problematic in areas of Southeast Asia where people drink arsenic-contaminated water and eat rice as a staple of their diets. Sometimes, they grow and cook their rice in the same arsenic-rich water they drink. “The risk is related to the concentration in rice that they have, and also the water they are drinking, and the amount of rice that [they] eat,” said Steve McGrath, a biogeochemist at Rothamsted Research in Harpenden, U.K., who was not involved in the study.

Arsenic toxicity also poses a problem for rice; among other things, it can significantly stunt plant growth.

The researchers opted to examine the role of OsABCC1 in rice because of previous research led by coauthor Won-Yong Song of Pohang University of Science and Technology, whose team found that related transporters sequesters arsenic in the model plant Arabidopsis thaliana.

Song and his colleagues have now found that OsABCC1 is found in the lipid membrane surrounding vacuoles, called the tonoplast, in rice cells. When the researchers knocked out OsABCC1, the rice grew poorly in the presence of arsenic compared to wild-type plants. Furthermore, while only 3.4 percent of arsenic found in total in the rice plants ended up in rice grains in wild-type rice, 20 percent to 24 percent made it to the rice grains in plants when OsABCC1 was knocked out.

The next step is to determine whether increased OsABCC1 expression can reduce arsenic levels in rice below their current levels in major cultivars. “The key now is to find rice or make rice through GMO [genetically modified organism] techniques that are suited to storing arsenic in the vacuoles,” said Meharg.

Study coauthor Jian Feng Ma, a professor at the Institute of Plant Science and Resources at Okayama University in Japan, said that his team plans to proceed on all fronts. He and his colleagues will attempt to use a strong promoter to overexpress OsABCC1, and they will also look at how expression levels of the transporter vary naturally between rice cultivars. If they find a cultivar that expresses high levels of the transporter and sequesters extra arsenic, they then may be able to breed that cultivar with more mainstream varieties.

Finally, Ma’s team continues to look for other transporters that either help bring arsenic to the rice grain or sequester it. “Maybe there are a lot of transporters for arsenic in different cells,” he said. “If you combine all of them, maybe you can get an arsenic-free rice.”