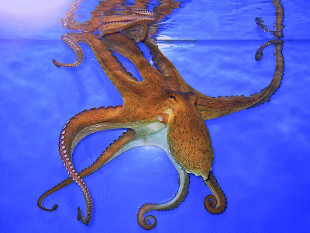 Octopus vulgarisWIKIMEDIA, H. ZELLWith eight long, flexible arms, no bones to keep them rigid, each containing hundreds of suckers that can grab and stick to virtually any surface, it’s nothing short of amazing that octopuses seem to never get tangled up in their own limbs. Publishing today (May 15) in Current Biology, Nir Nesher, Guy Levy, and their colleagues from the Octopus Research Group at The Hebrew University of Jerusalem, Israel, have uncovered a self-recognition mechanism through which octopus arms are prevented from interfering with each other.

“There is probably self-recognition. . . . No animal can get along in life without knowing ‘me,’” said Jennifer Mather from the University of Lethbridge in Canada, who was not involved in the study.

Octopus arms are covered in numerous suckers—bowl-shaped cavities made of thick muscles that can grasp objects with a vice-like grip. The sides and edges...

But they never grasp their own skin. In the lab, Nesher and Levy’s team presented amputated octopus arms with different objects, such as Petri dishes and food items. The researchers found that the suckers on the amputated arm never attached to the arm itself, or to another surface covered with octopus skin. When given Petri dishes partially covered with octopus skin, the arms avoided the skin and latched instead onto the plastic surface. The suckers did grab onto skinned parts of the arm, however, suggesting that they were specifically avoiding areas covered with skin.

Connecting a force transducer to the objects presented to the amputated arms, the researchers were able to measure the force with which the limbs grabbed different objects. The strongest grab was reserved for natural food materials, like fish.

Octopus skin extract—gel made from skin soaked in hexane—had a similar effect as the skin itself. When presented with a Petri dish coated with skin extract, the amputated arms grabbed with a force ten times weaker than on a plate coated with just hexane. This led the team to hypothesize that chemicals from the skin surface act as cues that inhibit the reflexive grabbing action of the suckers. And such inhibition is likely mediated at the level of each sucker, the researchers added; each octopus arm has 40 million tactile and chemical receptors, which are concentrated on the suckers.

“It’s probably not as all-or-none as this sounds, but it makes sense. We know that octopuses are guided by chemical cues, especially when hunting out-of-sight prey,” said Maher.

Next, to observe this behavior in the context of a live animal, the researchers presented individual Octopus vulgaris with amputated arms from conspecifics and also their own limbs. That may sound cruel, but “octopuses lose arms many times in nature and continue to behave normally,” Levy explained in an e-mail to The Scientist. “To be on the safe side, the operation was done while the animal was anesthetized.”

When presented with food, an octopus typically uses its arms to seize, manipulate, and bring the morsel to its mouth. When presented with amputated arms, the octopuses the researchers observed sometimes grabbed the arms at the site where flesh was exposed, brought them to their mouths, and held them there without using their arms. Resembling how humans can slurp pasta, the researchers called this behavior “spaghetti holding.”

The animals also seemed able to differentiate between their own amputated arms and those of other octopuses; about three-quarters of the octopuses treated conspecific arms as food, while they did not consider their own amputated limbs to be food. This implied that there was a self-recognition mechanism, allowing the central nervous system to override the inhibition of the sucker grasp, the researchers noted.

“From our previous work, we know that animals are able to recognize conspecifics and remember individuals previously met for at least one day,” said Graziano Fiorito from the Stazione Zoologica Anton Dohrn research institute in Naples, Italy, who was not involved with the study.

This scheme allows the octopus to use its arms for behaviors like searching and grasping without having to compute where and when the limbs might touch each other, preventing entanglement. “Although different octopus have different adaptations and lifestyles, it is possible that the phenomena we study are not relegated to a single species,” said Fiorito.