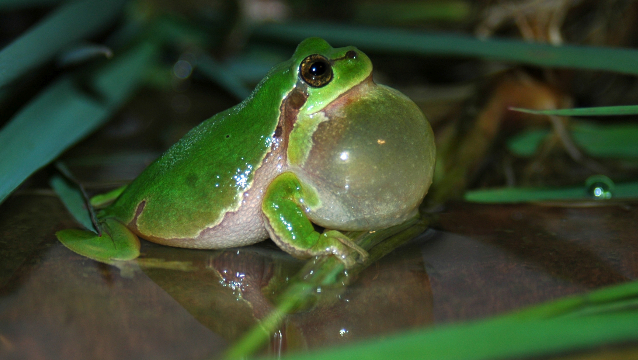 Hyla arboreaCOURTESY OF THIERRY LENGAGNEIf you’ve ever lived near a busy road, you’re familiar with the noise of cars whooshing by and ear-piercing honks. Traffic noise is a well-known source of stress in humans. Now, a team of researchers has found that it can cause increased stress levels in frogs too. And aside from a spike in stress, traffic noise can have other negative effects on the European tree frog (Hyla arborea), such as suppressed immunity and a dulling of males’ vocal sacs. The team’s results were published last week (January 11) in Conservation Biology.

To study the effects of road noise on frogs, Thierry Lengagne of the University of Lyon and the French National Center for Scientific Research (CNRS) and colleagues first recorded noise from a nearby high-traffic road. The scientists then played back the recording to 20 male frogs in the lab. After...

To quantify the amphibians’ stress, Lengagne’s team measured levels of the hormone corticosterone in frog saliva samples. Corticosterone levels increased from an average of 3.2 picogram (pg) per milligram (mg) of saliva at the start of the experiment to 5.06 pg per mg at the end of it—an increase of 58 percent.

Weakened immunity was another consequence of traffic noise exposure. Lengagne and colleagues carried out the phytohaemagglutinin swelling test for immunity on frogs and estimated that the immune responses of noise-exposed frogs were weaker than those of control animals by about 19 percent.

Suppressed immunity makes frogs more susceptible to disease, said Lengagne. “And disease is one of the main causes of the disappearance of amphibians.”

See “A Race Against Extinction”

A third effect of traffic noise was altered coloration of the vocal sac, which male frogs inflate when making advertisement calls to potential mates. The vocal sacs of noise-exposed males turned paler toward the end of the experiment, the researchers reported. Moreover, this loss of color was more prominent for higher-quality males that initially had the most colorful sacs.

Lengagne said that this could impact sexual communication among European tree frogs, as females tend to choose males that have colorful vocal sacs over males with duller coloration. But in noisy habitats, he added, the vocal sac color of an otherwise higher-quality male may appear similar to that of a poor-quality male, thus interfering with the ability of a female to differentiate between the two.

“Several studies have examined the effects of road noise on male calling behavior, [but] this study suggests a new mode by which road noise can have reproductive consequences,” Tracy Langkilde, a professor of biology at Pennsylvania State University who was not involved with the work, wrote in an email. “It also suggests a host of unexplored effects of road noise mediated through color change. Beyond mate choice, color can be important for other forms of social communication . . . like territory defense or competition over other resources.”

“This is an intriguing study showing that the effects of urban noise on frogs extend well beyond interference with their acoustic communication,” agreed ecologist Kirsten Parris of the University of Melbourne, who also was not involved in the study. She added that the observed effects might be extended to studies on other animal groups that use visual signals to attract mates, such as reptiles and birds.