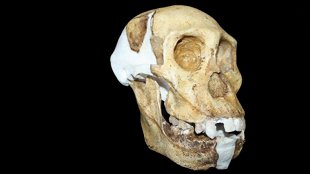 Reconstructed skull of Au. sedibaLEE BERGER, UNIVERSITY OF WITWATERSRANDThe fossilized teeth, jaws, upper and lower limbs, thorax, and vertebrae from three members of the species Australopithecus sediba reveal features characteristic of both primitive apes and the genus Homo, to which modern humans belong, according to six papers published online today (April 11) in Science. Whether Au. sediba is a definitive ancestor or merely a close relative of Homo, however, remains uncertain.

The fossilized skeletons of multiple Au. sediba individuals were discovered in a cave in...

In 2011, four papers were published in Science describing the hand, pelvis, foot, and partial skull of Au. sediba. The latest series of papers completes the analysis of the three skeletons found at Malapa and, like the earlier papers, reveals evidence of Au. sediba’s primitive and Homo-like mosaicism.

For example, three of the new papers describing the jawbone, teeth, and lower spine find that these particular structures share greater similarity with Homo species than with other Australopithecus members, such as Au. afarensis—the species made famous by Lucy. But, another paper describing the upper limb reveals an anatomy consistent with an arboreal, or tree-climbing, lifestyle—a more primitive characteristic.

“We think sebida was still climbing,” said Steven Churchill, a professor of evolutionary anthropology at Duke University in North Carolina and a coauthor on five of the six new papers. “We’re looking at a transitional group, which is partly arboreal and partly terrestrial.”

Simpson thinks that Australopithecus species, who walked on two legs like members of the Homo genus, were unlikely to spend much time up trees, however. “What makes a good biped makes a terrible arborealist,” he said. “I would propose that when sediba climbed a tree, it did so the same way you or I do, meaning that it had the same limitations as to the way it could put its foot on the tree, the way it could pull itself up, the way it could sit on the tree.”

Whether or not Au. sediba spent much time in trees, its locomotion on the ground was certainly unusual, according to one of the new papers: the early hominid appears to have put a lot of weight on the inside edge of the foot—similar to the abnormal gait called hyperpronation seen in some humans. “The biggest surprise was in the lower limb paper,” said Churchill. “Au. sediba had its own unique way of walking . . . and that’s really interesting because it suggests to us that there were different ways of being a biped in early human evolution.”

Despite the anatomical similarities between Au. sediba and Homo, whether the former was an ancestor of modern humans is still up for debate. “Anatomy is very prone to independent evolution,” said Richmond. “I think the jury is still out on whether this could have been an ancestor of the Homo genus. . . . There’s not enough compelling evidence.”

But Churchill is convinced. In addition to the features documented in the current papers, the previous Science papers showed Homo-like features in Au. sediba’s brain—determined from patterns on the inside of the skull—pelvis, and hand—the latter indicating Au. sediba engaged in Homo-like tool use. “It seems to me much more parsimonious that they share these features with Homo because they are the ancestors of Homo, rather than because they evolved in parallel,” Churchill said.

There is another possible hiccup to the theory of Au. sediba as the ancestor of Homo, however, said Richmond. “This particular set of fossils”—calculated to be a little less than 2 million years old—“is too recent in time to be the ancestor of Homo. . . . We already have Homo habillis at this time and Homo erectus only a short time later.”

But Churchill argued that there’s no reason why the two species couldn’t have coexisted. “There’s nothing in biology that says a parent species and daughter species can’t temporally overlap,” he said. “Even if the genus Homo dates back to 2.33 million, as some people believe, it’s not unreasonable to think that Au. sediba had a temporal span that predates 2.33 million years.”

“It is possible that this is a late surviving population of Au. sediba,” Richmond agreed. But what would settle the matter, he said, is if there was “the equivalent to the Malapa fossils at several time points between 2 and 3 million years ago. Now, that would be terrific.”