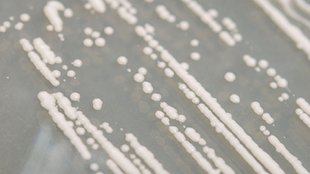 WIKIMEDIA, LILLY_MA large number of human genes can substitute for their defective counterparts in yeast and prevent the microorganisms from dying, according to a paper published today (May 21) in Science. Of more than 400 human-to-yeast gene replacements performed, almost 50 percent were effective at compensating for a missing vital function.

“No one has carried out an evolutionary study of this kind before and certainly not of this scale,” said Nevan Krogan of the University of California, San Francisco, who was not involved in the work. “It’s rather satisfying to see that half of the genes could complement [the yeast function] because it justifies continuing working in yeast as a model . . . to help understand human genes.”

Bakers’ yeast (Saccharomyces cerevisiae) shared a common ancestor with humans about a billion years ago. And this relationship, albeit distant, means that “when we read the DNA...

These shared genes may appear similar, but Marcotte wanted to put them to the test, asking: “Are they swappable?” That is, could the gene encoding a human protein replace the corresponding gene in a yeast cell? Such experiments have been performed for a number of individual genes, but a large-scale, systematic approach had been lacking. “We wanted to test it for as many genes as we could feasibly do,” Marcotte said.

The team chose test genes based on two criteria: that the yeast version of the gene was present in a single copy and that it served a function critical to cell survival. Using yeast strains in which these critical genes could be turned off at will, the team tested whether transfer of the equivalent, or orthologous, human gene could save the yeast from death.

The team went on to examine whether the pairs of orthologs that could be successfully swapped had any common characteristics. Highly similar protein pairs (sharing more than 50 percent of their amino acid sequences) were more likely to be swappable. However, for orthologous pairs in the middle range (20 percent to 50 percent shared amino acid sequence), the degree of similarity had no influence. “That was quite surprising,” said Marcotte, “because we just assumed that the more similar they were, the more likely they would be to replace [function].”

It appears that if a process as a whole has diverged between yeast and humans, then its proteins “have all changed together,” said Madan Babu of the Medical Research Council Laboratory of Molecular Biology in the U.K., who was not involved in the work. “If you can’t replace some of the subunits of the DNA repair machinery, then you can’t replace any of them.”

The results could have implications for medical research, said Babu. For example, “in the human population you have many individuals that carry single nucleotide polymorphisms and it is almost impossible to test what is the effect of these [on the protein],” he said. But, if the protein can be swapped into yeast cells, then “I could put in a hundred different variants of the human ortholog and, for example, I could rapidly screen whether they are sensitive to the presence of this or that drug.”

“Those are the kind of experiments that this study now tells us are conceptually possible,” he added.