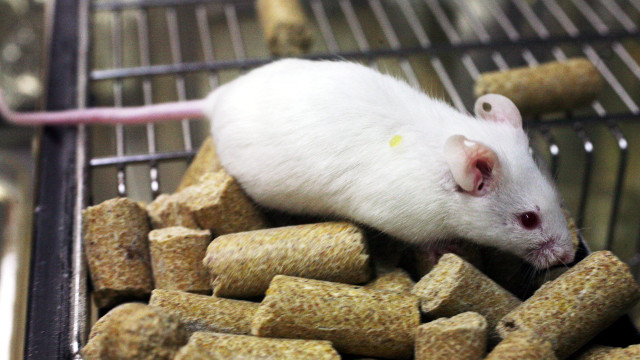 WIKICOMMONS, RAMAResearchers have been unable to pinpoint the causes of irritable bowel syndrome (IBS), a heterogeneous disorder characterized by both diarrhea and constipation. IBS can also be accompanied by symptoms associated with anxiety and depression and, thus, is thought to affect gut-brain communication.

In a study published today (March 1) in Science Translational Medicine, researchers from McMaster University in Ontario, Canada, and their colleagues demonstrate evidence of a direct link between gut microbes and the symptoms and behaviors of IBS in mice. Germ-free mice that received fecal microbiota from patients with IBS mimicked the symptoms of the disorder, including anxiety-like behaviors, the team reported.

“This [study] is a wonderful demonstration for the functionality of the microbiota, showing gut bacteria from subjects with irritable bowel syndrome can induce both gastrointestinal issues, as well as the anxiety that is co-morbid with IBS,” Sarkis Mazmanian, a professor of microbiology at Caltech...

“The field can often get stuck in simply cataloging gut microbes and asking which species are present or absent during a specific condition. However, this study takes the next steps and addresses how distinct populations of bacteria can directly influence a number of physiological outcomes that are pertinent to the illness,” wrote Timothy Sampson, a postdoc in the Mazmanian lab who also was not involved in the work.

McMaster gastrointestinal disease researcher Premysl Bercik and colleagues used stool samples from eight patients with a history of IBS with diarrhea for at least two years, as well as from five healthy individuals, to colonize the guts of germ-free mice. A portion of each individual’s fecal sample was transplanted into 10 different mice. “We know there is a constant communication between the gut and the brain, and in IBS and other functional bowel disorders, this communication is altered,” Bercik told The Scientist. “We wanted to understand how the gut microbiota fits in.”

After three weeks, the researchers assessed the composition of each rodent’s gut microbiota and compared the bacterial profiles to those obtained directly from the individuals’ fecal samples. The mice that received fecal transplants from people with IBS showed both faster movement of luminal contents through the gastrointestinal tract and higher gut permeability compared to mice that received a fecal transplant from a healthy human donor. The team also identified types and levels of seven metabolites that differed between the two groups of mice that received transplants from healthy donors or from people with IBS, including several forms of lysophosphatidylcholine and phosphatidylserine, which were increased and decreased, respectively, in mice colonized with bacteria from IBS patients.

“The authors’ experimental setup and analyses are really thorough. They included many animals in their experiments to arrive at their conclusions,” said June Round, an assistant professor of pathology at the University of Utah School of Medicine who was not involved in the work.

The team next examined whether the anxiety-associated behaviors linked to IBS could also be transmitted to the mice via transplanted gut microbes. The researchers used two well-established tests to measure anxiety-like behaviors in the mice: the amount of time it took for an animal to step down from an elevated platform to explore its environment, and the time an animal spent in the dark versus exploring a well-lit chamber.

One caveat of the experimental approach, according to Round, is that there are likely organisms that contribute to IBS that are lost during transplantation from human to mouse. These organisms might be under-represented bacterial species not captured by current sequencing technologies.

For Sampson, the behavioral outcomes were not that surprising. “We have known for some time that different populations of gut microbes, derived from mice, can exert differential effects on anxiety phenotypes in those mice. However, this study is able to identify distinct bacterial taxa and even specific bacterial metabolites derived from humans that correlate with how the animals perform in anxiety measures.”

“Our work shows that the gut microbiota from patients with IBS has the capacity to induce the same gut dysfunction in mice that we see in the patient, suggesting that the gut bacteria are at least one main contributor to IBS,” said Bercik.

With a list of potential bacterial species—and their associated metabolites—that might contribute to IBS, the team is trying to zero in on causative factors.

Mazmanian is optimistic about the direction of this research. “This research may lead to identification of bacteria or bacterial products that may mediate gut-brain interactions, and potentially inform novel development of treatment avenues for IBS and its associated symptoms,” he wrote.