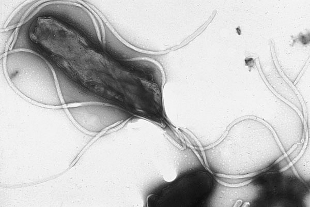 Electron micrograph of H. pylori WIKIMEDIA, YTAKA TSUTSUMIHelicobacter pylori is a widespread bacterium that colonizes the gut mucosa in nearly half the human population, causing gastric inflammation and, in a small percentage of patients, stomach cancer—the second leading cause of cancer-related deaths worldwide. But the prevalence of H. pylori infections do not correlate with cancer incidence, suggesting other factors are at play. In a study published today (January 13) in PNAS, researchers provide evidence that those other factors include the ancestry of both the host and the pathogen: patients that are infected with H. pylori strains that have a distinct ancestry from their own are more likely to suffer severe disease.

“For the first time, [this study] suggests that we have to take the ancestry of both host and microbe into the equation,” said Emad El-Omar, a gastroenterologist and cancer biologist at the University of Aberdeen, who...

The research is the latest study of two Colombian populations that have served as poster children for the study of gastric cancer. A coastal population of primarily African ancestry has a relatively low incidence of the disease as compared with a population of largely Amerindian descent in the Andes Mountains just 200 kilometers away. For years, pathologist and native Colombian Pelayo Correa, a pioneer of gastric cancer research, has puzzled over this discrepancy.

Curious about the role of coevolution between these populations and their pathogens, Correa, along with molecular biologist Barbara Schneider of Vanderbilt University Medical Center and colleagues, decided to take a closer look at the H. pylori strains afflicting patients in these regions. As Colombian patients came into the local hospitals requiring endoscopies, the researchers would ask for volunteers to donate a tissue sample. The samples were then shipped on dry ice to Schneider’s Vanderbilt lab, where her team cultured and analyzed the bacteria within. In the end, the researchers found that while all H. pylori sampled showed evidence of multiple ancestries, those in the coastal region, with a low incidence of stomach cancer, were dominated by ancestral African makeup, just like their human hosts. Those in the mountain region, on the other hand, where gastric cancer is more common, appeared to be more closely related to H. pylori of southern Europe, unlike the predominately Amerindian human population. The results suggested that a shared evolutionary history of humans and bacteria resulted in a less virulent host-pathogen relationship.

“[It’s] fascinating,” said El-Omar. “If you have African strains affecting African-ancestry hosts, it doesn’t cause too much damage, whereas if you’ve got African-origins strains infecting Amerindians up in the mountains, that’s when you get most precancerous changes. So it looks like if you’ve coevolved with your strains, you get less and less virulence.”

Looking more specifically at the relationship between individual patients and their H. pylori infections was even more telling: “The more Amerindian ancestry you see in people and the more African components in the Helicobacter strain, the more likely the person is to have severe gastric lesions,” said Schneider.

The interaction between host and pathogen ancestry was strong, having an effect “five times higher than the effect of cagA,” or cytotoxin-associated gene A, which “is recognized so far as the most virulent H. pylori factor in the gastric cancer process,” Carlos González, an epidemiologist Catalan Institute of Oncology in Barcelona, Spain, who was not involved in the research, said in an e-mail.

Of course, El-Omar added, there are other relevant factors to consider, including the presence of harmless worm infections—which dampen inflammatory responses—as well as iron levels and diet. “This story keeps getting more and more interesting and more and more complex,” he says. “It will require [more] studies to unfold the whole story.”