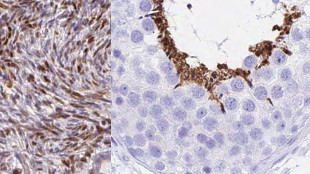 Ovary stained for MUM1L1 (left), testes stained for unknown protein encoded by C2ORF57 (right)HUMAN PROTEIN ATLAS Researchers in Sweden have completed an exhaustive map of protein and RNA expression across 32 human tissues and organs. Mathias Uhlén of the Royal Institute of Technology in Stockholm and his colleagues report their findings today (January 22) in Science. The Human Protein Atlas joins the Human Proteome Map, among other publicly available proteomics resources.

The team generated this latest catalog of the human proteome using more than 24,000 polyclonal antibodies to visualize the locations of each of 16,975 unique proteins, corresponding to 85 percent of all genes in the genome. The result is more than 13 million antibody-stained immunohistochemistry images. To add a quantitative layer, the team supplemented its spatial protein mapping with quantitative RNA-sequencing data for 32 tissues types. Users of the Human Protein Atlas can search for and...

“The big strength of this [database] is the ease of navigation,” Anne-Claude Gingras, a proteomics researcher at the Lunenfeld-Tanenbaum Research Institute in Toronto, Canada, who was not involved in the work, wrote in an e-mail to The Scientist. “[The authors] have done a great job with putting the results out there in an easy-to-use format.”

The full map shows 44 percent of protein-encoded genes are expressed in all tissues. “[It is notable] that there are only a small number of proteins that are really tissue-specific,” said Human Protein Atlas user Hanno Langen, global head of proteomics at Hoffmann-La Roche in Basel, Switzerland, who was not involved in the work.

This latest human proteome map differs from previously published drafts, which used mass spectrometry to analyze protein levels in human tissues. The two approaches are complimentary, said Akhilesh Pandey, a proteomics researcher at Johns Hopkins University in Baltimore, Maryland, who leads a mass spectrometry-based proteome effort. While mass spectrometry can identify and quantitate protein levels, immunohistochemistry provides resolution at a cellular level within a tissue that mass spectrometry cannot, Pandey told The Scientist in an e-mail. The Human Protein Atlas provides the subcellular localization of each protein—either membrane, secreted, or soluble.

Visualizing the locations of proteins is helpful, said Langen. “Especially for the pharmaceutical industry, we can use [the information] for targeting approaches and to answer safety-related [drug] questions.”

One caveat of using antibodies is cross-reactivity. But because many of the antibodies can be readily purchased from antibody suppliers, the discovery and validation of tissue specificity of a large fraction of the proteome is feasible, said Gingras.

Data on olfactory receptors and several other membrane proteins are still missing from proteomic datasets, said Pandey. As is information on low-abundance proteins, as well as those that are nearly identical and cannot be distinguished using mass spectrometry nor immuno-staining.