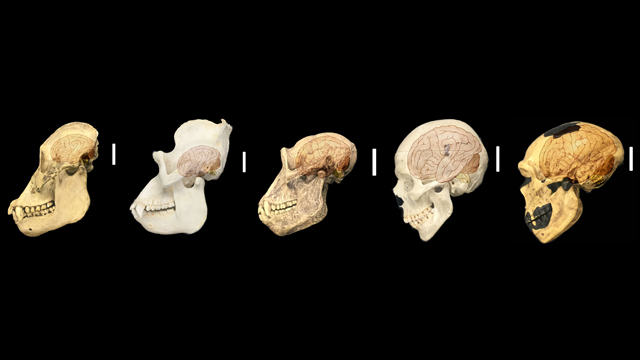 Left to right: orangutan, gorilla, chimpanzee, human, and Neanderthal skulls overlaid with an illustration of the corresponding brainFIDDES ET AL.In the last few million years, the brains of humans and human ancestors have quickly evolved to be much bigger and more complex than their primate relatives. The genetic and molecular mechanisms that drove this expansion are still poorly understood, but two studies published today (May 31) in Cell describe a new gene family unique to humans that may have played a role in building bigger brains. The NOTCH2NL gene family is expressed during human cortical development and promotes neural progenitor cell renewal, which leads to more neurons.

We have an exceptional opportunity to find the changes that occurred in our ancestors’ DNA that made us human.

“We know very little about how human-specific genes . . . might impact brain...

“Usually in biology, we tend to think that it’s the things that are highly conserved that are very important,” says a coauthor of one study, Pierre Vanderhaeghen, a developmental neurobiologist at the Université Libre de Bruxelles and Katholieke Universiteit Leuven in Belgium. “If we only look at the things that are super conserved, we’re never going to find out what goes on during human evolution [because] the human-specific genes by definition are not present.”

In order to investigate unique human genes involved in cortical development, Vanderhaeghen and colleagues sequenced RNA from human fetal cortical tissue collected after medical pregnancy terminations that occurred between seven and 21 weeks of gestation. They identified 35 genes specific to humans and their immediate ancestors with open reading frames that suggested the genes actually code for proteins. The 35 genes arose through gene duplications and were part of 24 gene families.

The researchers then electroporated members of nine of the gene families—selected based on their expression in progenitors during cortical neurogenesis—into the brains of developing mice. They found that gain-of-function of a particular gene, NOTCH2 N-terminal like B (NOTCH2NLB), maintained cells in a progenitor state, rather than following their typical timeline of differentiation. NOTCH2NLB is related to NOTCH2, which is conserved across mammals and known to be involved in neurogenesis via the Notch signaling pathway.

Next, the team manipulated the function of NOTCH2NLB in an in vitro human embryonic stem cell model of cortical development. The group showed that its overexpression leads to re-entry of progenitor cells into the cell cycle via the Notch signaling pathway, resulting in a corresponding expansion of cortical progenitor cells and an eventual increase in the quantity of neurons coming from these progenitors.

Showing that more NOTCH2NLB activity can increase the neuronal progenitor population is fascinating, Vanderhaeghen says, because it mimics what may have happened during the evolution of neurogenesis. The NOTCH2 duplications could have acted as a real-life gain-of-function experiment, leading to more neuronal progenitors and neurons in the human cortex than exist in the brains of other animals.

The other study began with Frank Jacobs, who was a postdoc with Sofie Salama and David Haussler at the University of California, Santa Cruz, at the time and now runs a lab at the University of Amsterdam, comparing in vitro neurogenesis of human and rhesus macaque embryonic stem cells in an effort to compare cortical development in the two species. Jacobs found “this Notch gene, NOTCH2NL, that none of us knew anything about, but it had this striking pattern where it was basically on at all time points in human and off at all time points in macaque,” says Salama. “Then we figured out [that] it’s a human-specific gene.”

When the authors investigated the genomic context of NOTCH2NL, they identified four NOTCH2NL family members, three of which—NOTCH2NLA, NOTCH2NLB, and NOTCH2NLC—cluster together on the first chromosome. Their analyses revealed that NOTCH2NL-like genes exist in other primates, including gorillas and chimpanzees, and came from a duplication of NOTCH2. But the only species with functional NOTCH2NL genes are humans and their closest ancestors, Neanderthals and Denisovans. In other primates the NOTCH2NL family members are pseudogenes. The researchers determined that NOTCH2NL became functional in hominins about 3.5 million years ago after a gene conversion event that combined the promoter and first exon of NOTCH2 with NOTCH2NL. This lengthier gene was then duplicated to give rise to A, B, and C.

Consistent with the findings of Vanderhaeghen and colleagues, the team found NOTCH2NL expression in neuronal progenitor cells in human fetal tissue, that its overexpression could affect mouse cortical development, and that NOTCH2NL functions within the Notch signaling pathway. They then deleted NOTCH2NL genes in human embryonic stem cells and directed them to develop into cortical cells. Without NOTCH2NL, the resulting organoids were smaller and made neurons earlier in development, suggesting that NOTCH2NL in the normal human brain delays the differentiation of progenitor populations. 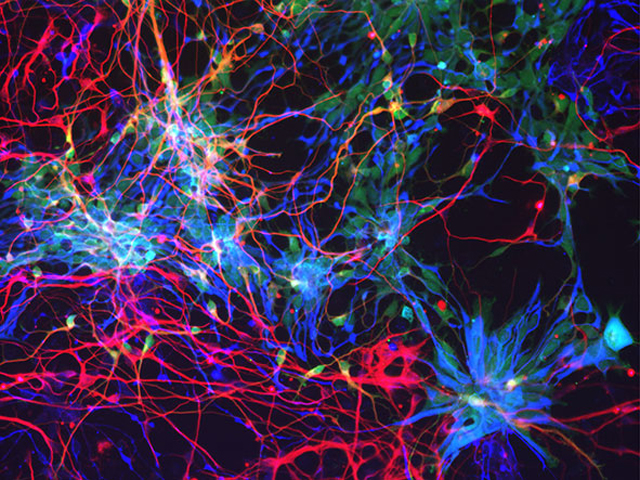 In addition to the links to evolution and development, the researchers also suggest a NOTCH2NL connection to a rare disease known as 1q21.1 distal deletion/duplication syndrome. People with this syndrome have a duplication in or lost a portion of chromosome one and can exhibit macrocephaly or microcephaly respectively, along with other neurological symptoms, such as schizophrenia and autism. The authors found that the site of DNA breakage in six people with this syndrome was in or close to the site of NOTCH2NLA and NOTCH2NLB.

“The functional evidence that has been put forth in these papers is super promising and exciting. This a great start,” says Megan Dennis, a geneticist and genomicist at the University of California, Davis, who was not involved in the studies. One open question is whether “this particular gene [NOTCH2NL] is necessary and actually contributed to the extension of the neocortex. That’s a really hard question to be able to solve because so many other different variants could have contributed,” she says.

See “What Made Human Brains So Big?”

The two studies have done well in their characterization of cortical genes, says Barbara Finley, who studies brain evolution at Cornell University and did not participate in the work. But she cautions that attributing the evolution of bigger brains solely to human-specific genes could be problematic based on previous research showing that animals with bigger brains undergo longer periods of neural development. “If you’re talking about what makes our big cortex, the only real possibility is whatever controls duration,” she says.

“There were definitely other genes that contributed substantially to the evolutionary process of getting a bigger brain,” says Haussler. He, Salama, and colleagues plan to look into those other genes, especially in 1q21.1 deletion/duplication syndrome, as there are at least eight other genes lying on the chromosome between NOTCH2NLA and NOTCH2NLB that could be involved. “This is an extraordinary era for understanding how the human brain evolved into what it is today,” he adds. “We have an exceptional opportunity to find the changes that occurred in our ancestors’ DNA that made us human.”