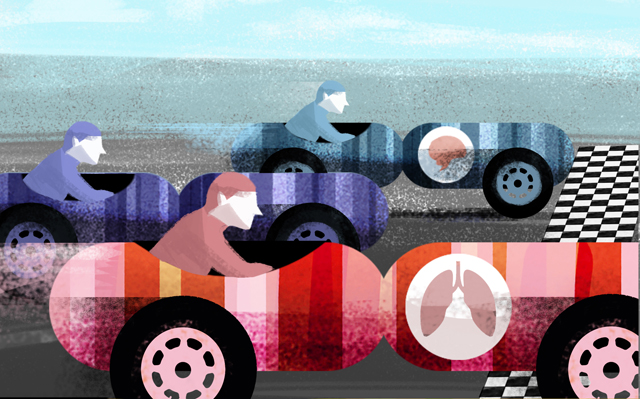 An artist’s imagining of retro Formula 1 racecars as banded chromosomes to highlight the Cancer Genome Atlas Research Network’s effort to identify molecular drivers of cancerMARK JARMANWhile researchers have known for years that cancer runs in families, the hundred or so genes that have been predicted to affect cancer development don’t account for how widespread heritable cancers are. A study published today (April 5) in Cell finds more than 850 rare genetic changes that are inherited and found in every cell in the patient’s body—germline variants—that can contribute to cancer’s progression and are common across multiple cancer types. The findings help explain some of cancer’s heritability and suggest that sequencing healthy tissue alongside tumor tissue is important for optimizing treatments.

“This paper is just an eye-opener,” says Hendrik-Tobias Arkenau, an oncologist, researcher, and medical director of the Sarah Cannon Research Institute in the U.K. who was...

The pathogenic germline variants are highly expressed in the tumor, which suggests that they are under selection and the tumor cells need them to keep the cancer progression going.

Li Ding, a cancer geneticist at Washington University in St. Louis, and colleagues analyzed data from the Cancer Genome Atlas (TCGA), which includes the genomes of normal tissue and tumors from more than 10,000 adults with 33 different types of cancer. The researchers used a cloud-based bioinformatics pipeline to identify 1.46 billion germline variants and then to determine which of those actually contribute to cancer predisposition. They narrowed it down to 853 alterations—occurring in about eight percent of cases—that are likely meaningful to disease progression, based on what was known about the genes in which they occurred.

Of the 853 heritable changes the research team found, some were less surprising. For instance, the program linked germline variants in tumor suppressors BRCA1 and BRCA2 to breast and ovarian cancer. But the researchers also showed that rare changes in these genes appear to predispose individuals to developing pancreatic cancer too. And while Ding and colleagues detected many of the pathogenic germline variants in tumor suppressors, they saw alterations in oncogenes that are likely to increase their expression and thus cancer predisposition as well.

“When you are looking at the individual cancer types, you can find this and that, but putting them together gives you the big picture view,” says Ding.

In addition to finding shared alterations across cancer types, she adds, another powerful feature of the study was having paired tumor and normal genomes and expression data. The side-by-side comparisons allowed the group to determine that the pathogenic germline variants are highly expressed in the tumor, which suggests that they are under selection and the tumor cells need them to keep the cancer progression going, she says.

“This paper is important as it is the largest investigation of predisposition variants in cancer. However, the findings are largely based on the dataset that is used for the analysis, [which includes mostly] primary tumors,” Liying Zhang, a medical geneticist at Memorial Sloan Kettering Cancer Center in New York who did not participate in the study, writes in an email to The Scientist. “It will be important to expand this type of large analysis to paired tumor-normal samples from . . . metastatic tumors, as well as from leukemia and other blood cancers which present challenges in collecting the normal samples,” she adds.

Arkenau says that the biggest challenge when translating these findings into clinical practice is that many providers lack training to integrate normal and tumor genetic data into their practice. “Some patients are not treated appropriately. Some families are not counseled appropriately,” he says. “There’s a chance that you’re missing families who have a genetic disorder or predisposition.”

“When you do tumor sequencing, you need to consider that you might find a germline mutation that might be the causal event—at least to some degree—of this person’s tumor,” agrees Marilyn Li, a medical geneticist at the Children’s Hospital of Philadelphia who was not involved in the work. She adds that knowing the genetic predisposition to cancer is especially important in children, as they have a long life ahead during which cancer could recur.

Focusing on the influence of germline mutations in cancer is only one part of TCGA’s PanCancer Atlas project, the conclusions of which Ding and colleagues describe in a perspective also published today in Cell. The project also includes investigations of immune system and cancer interactions and connections among cancer genomics, epigenomics, and gene and protein expression.