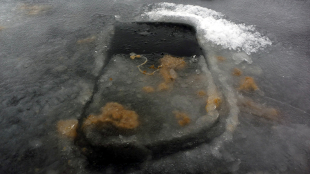 Surface of a refrozen melt pond with Melosira arctica filaments trapped in at one of the team's research stations.PHOTO COURTESY OF MAR FERNANDEZ-MENDEZ (ALFRED WEGENER INSTITUTE)Forests of filamentous algae that grow just beneath Arctic Sea ice are falling to the ocean floor earlier in the year than ever before. There, they provide unexpected fuel to a typically nutrient-poor environment, potentially altering the dynamics of the deep-sea ecosystem, according to new research published today (February 14) in Science from European scientists. Climate change, which has already contributed to thinner summer sea ice coverage, increased sunlight penetration, and accelerated melting in the Arctic, is likely a key factor in the ecological shift.

Aboard the research vessel Polarstern, researchers from Germany, the Netherlands, and Russia sampled ice-covered Eastern Central basins of the Arctic Ocean last summer, as Arctic sea ice coverage was receding to its lowest level in recorded history....

Using a submersible vehicle equipped with cameras, they saw heaps of fresh algae littering the normally barren seafloor 3–4 kilometers down. The algae, which consist of individual cells of a diatom, Melosira arctica, normally cling to the underside of the ice in long, filamentous threads, but break free and sink to the bottom as ice thins and cracks when temperatures warm.

Antje Boetius, biological oceanographer at the Alfred Wegener Institute for Polar and Marine Research in Bremerhaven, Germany, who led the research team, said that other polar explorers had previously reported seeing scads of M. arctica, looking like “reverse kelp beds under the sea ice,” but never before had researchers spied deposits of fresh algae that had sunk to the bottom. And the scientists suspect that the “massive algal falls” were rare in the past and likely happening earlier in the warmer Arctic.

In addition to capturing images of the clumps of still-green algae lying on the seafloor, Boetius and her team measured oxygen penetration in sediments adjacent to the algal falls, noting that O2 reached far deeper into the sediments without algae than in sediments with algae sitting on top. This difference, Boetius said, was due to increased respiration in the algae-littered sites as bacteria and macrofauna, such as sea cucumbers and brittle stars, moved in to take advantage of the manna from heaven.

See a slide show of images from Boetius's expedition

“With the thinning ice we think that the sub-sea ice algae can grow much faster and earlier in the season,” Boetius said. “These large algal falls will export a lot of nutrients from the ice to the sea floor,” which can seriously impact ecosystem dynamics over time, especially if fresh algae continues to fall earlier and in larger amounts due to ice thinning.

“Historically there hasn’t been much flux of carbon from the surface to the deep sea,” said Kevin Arrigo, a Stanford University biological oceanographer who wasn’t involved with the study. In summer 2011, Arrigo and colleagues discovered unprecedented phytoplankton blooms occurring under the sea ice in a shallower part of the Arctic Ocean. “With this new regime you might expect that that system is cranking up a bit more than it had to before,” he said. “You may see a shift to the more opportunistic species—those that grow quickly in response to increased food supplies.”

The macrofauna that Beotius and her team captured on film could be the front lines in just such an ecological shift in the Arctic. “They really were able to photo-document all this stuff that was happening 3,000–4,000 meters below the surface, which we typically don’t get to see,” Arrigo added. “They’ve got really nice evidence of the activities of these species at the bottom.”

Both Arrigo and Boetius stressed the need for continued monitoring of the under-ice Arctic ecology as the summer ice cover changes year after year. “It would be really cool to go back regularly and check what happens to the Arctic deepwater,” Boetius said.

“The need now is to actually have concerted efforts to go sample into and underneath the ice,” Arrigo concurred. “You can’t see these things under the ice from satellites. The only way to do it is to go there and look.”