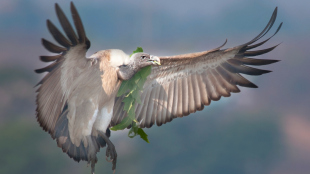 PHOTO COURTESY: MUNIR VIRANI, THE PEREGRINE FUNDA mass killing of several species of vultures in the Indian subcontinent over the last two decades is largely blamed on the presence of a drug, diclofenac, in the cow carcasses the birds eat. The Indian government banned veterinary use of the painkiller in 2006, and a new study published today (October 13) in Philosophical Transactions of the Royal Society B shows a decline in cow carcasses testing positive for diclofenac and an increase in the use of a vulture-safe alternative drug.

The results are “tremendous news,” Munir Virani, the Africa Programs Director of The Peregrine Fund, a nonprofit dedicated to conserving birds of prey, said in an e-mail to The Scientist. Still, “this does not mean vultures are not dying of diclofenac poisoning,” added Virani, who did not participate in the study. “It simply means that there is much less...

Diclofenac is a non-steroidal anti-inflammatory drug (NSAID) that farmers use to ease pain in their cattle. About a decade ago, Rhys Green, a conservation biologist at the Royal Society for the Protection of Birds and the University of Cambridge, and others identified diclofenac as responsible for wiping out vulture populations across India, Pakistan, and Nepal. The drug is now known to be toxic to vultures that scavenge the carcasses of animals medicated with diclofenac.

Governments of the affected countries responded by banning the veterinary use of diclofenac and encouraging veterinarians to instead prescribe meloxicam, another NSAID considered vulture-safe. In Green’s latest study, which is part of an ongoing monitoring project, his group sought to measure trends in NSAID use, so they analyzed liver samples from more than 6,200 cattle carcasses across sites in India.

The team found that the presence of diclofenac in carcasses dropped by about 50 percent between 2005 and 2009. And from 2006 to 2009, the prevalence of meloxicam increased by 44 percent. Moreover, sites that saw big drops in diclofenac overlapped with sites where there were large increases in meloxicam use, supporting the idea that farmers are replacing the toxic drug with the safe one.

“It looks as if, if one can be successful in persuading people to use meloxicam, the alternative safe-to-vultures drug, then you’re quite probably going to reduce the use of toxic diclofenac,” Green said.

It’s clear from Green’s data, however, that illicit diclofenac use persists; on average, nearly 10 percent of samples tested positive in 2009. “Diclofenac is manufactured in small villages by unauthorized” facilities and marketed for humans, said Dau Lal Bohra, a vulture researcher and conservationist in North West Rajasthan, India, who was not part of the study. Cost, culture, and availability keep diclofenac around, said Kerri Wolter, the founder and CEO of Vulpro, a vulture conservation program based in South Africa.

Bohra pointed out that diclofenac and meloxicam are just two of a number of veterinary medicines ingested by scavengers, and that there’s a need to determine the safety of them all. Just last week (October 9), for instance, a paper in Conservation Biology reported evidence of a vulture having been poisoned by an NSAID called flunixin. It’s the first report of toxic effects of an NSAID other than diclofenac.

“The other very special significance about [the flunixin poisoning is] it wasn’t in India; that was in Spain,” Green said. “Last year, the Spanish government approved use of diclofenac in Spain, much to everybody’s consternation.” Spain is home to most of Europe’s vultures, and conservation organizations are petitioning the government to reverse its decision.

Captive breeding programs and “safe feeding zones”—essentially, the placement of pharmaceutical-free carcasses for vultures to eat—may help vulture populations rebound in India, said Wolter. “I think that, in conjunction with preventing the manufacture of diclofenac, it is definitely helping.” She added that safe feeding programs will only work as long as carcasses are screened and if the toxicity of all veterinary drugs is understood.