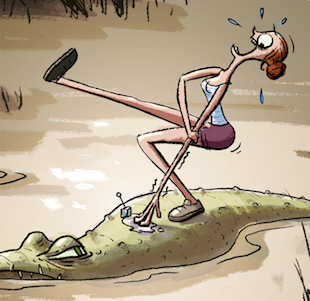 Artist’s interpretation of Agata Staniewicz’s July 2015 tweet. JIM JOURDANELast August, the hashtag #FieldworkFail set Twitter abuzz with tales of scientists’ mishaps in the field—from accidentally inhaling a fossil to gluing oneself to a vicious predator. Now, illustrator Jim Jourdane plans to immortalize these stories in a book called Fieldwork Fail: The Messy Side of Science.

Jourdane has spent the last few months illustrating scientists’ stories on his blog, and plans to turn those into a book he will self-publish. The book will include an illustration of each scientific blooper he has chosen to feature, as well as some facts about the associated science.

“I had very positive feedback from scientists on Twitter,” Jourdane said.

The book will feature stories submitted by Agata Staniewicz, a biologist at the University of Bristol, U.K., who...

“The Fieldwork Fail book is a fantastic project and a great way to make research accessible to the general public,” Staniewicz wrote in an email to The Scientist. “It also helps to show that mistakes and failures are a normal part of the scientific process, which can be especially encouraging for students, and any scientists struggling with fieldwork.”

Stratford agreed. “Failures are part of the process” of doing science, he wrote in an email. “As for Mr. Flappy, falcons kill hundreds of birds to feed their young and thousands over their lifetime. [It’s] just how life works.”

To date, Jourdane has raised more than $24,000 in a Kickstarter fundraising campaign. He told The Scientist that he plans to ship copies of the book and sell it on his website by January 2017.