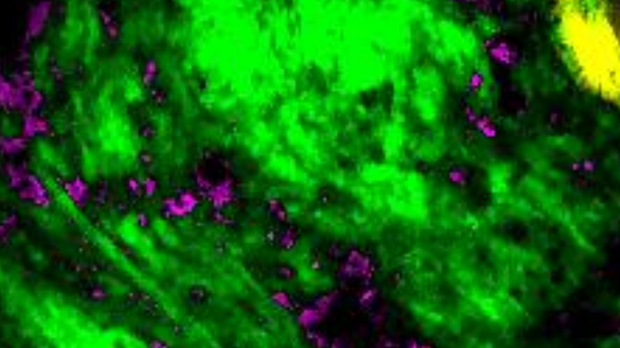 Human breast cancer sample in situ: proteins (green), DNA (magenta), and fat (yellow) PURDUE UNIVERSITY, CHIEN-SHENG LIAOA type of imaging that can capture the activity of proteins, lipids, nucleic acids, and other molecules in some living tissues without the need for fluorescent labels has been in the works in the last decade. But while this technique, called in vivo vibrational spectroscopic imaging, can be used to visualize tissues without the need for fluorescent labels, it has still been too slow to be practical for most research and clinical applications.

Now, researchers at Purdue University in Indiana have made two major improvements to the approach, making it fast enough to be used in real-time and allowing imaging of not just transparent but also thicker, turbid living tissues. The results are published today (October 30) in Science Advances.

“This is a very innovative approach,” said Wei Min of the department...

“This is good progress toward making this technique more practical,” said bioengineering professor Stephen Boppart, who develops novel imaging modalities at the University of Illinois and was not involved in the work. “The authors have made the acquisition faster, allowing image collection in vivo and in highly photon scattering tissues.”

While fluorescence microscopy requires labeling a cellular component with a fluorophore, the appeal of in vivo vibrational spectroscopic imaging is the ability to produce images that include most of the endogenous molecules within tissues or cells without the need to label any cellular components. The original technique sends light through a sample, exciting the molecules in the sample to vibrate at distinct frequencies, which are then registered as a spectrum or a pattern of peaks. For each pixel, a spectrum of frequencies is created and an image is compiled by merging all of the spectra. A spectrometer collects the well-directed light that goes through the same, and separates it into its individual wavelengths while excluding scattered photons—components of light—that decrease the resolution of the light’s spectrum. This method is limited to use for transparent and single-cell layer biological samples because nontransparent samples, such as live tissue, scatter too many photons, resulting in poor resolution.

Purdue’s Chien-Sheng Liao, a biomedical engineering graduate student, and Ji-Xin Cheng, a professor at the Weldon School of Bioengineering, along with their colleagues have eliminated the need for the spectrometer by imparting the photons that go into the specimen with signature vibrational frequencies. The photons are dispersed throughout a sample and collected with a single detector.

“The idea is that before we send the photons into the tissue, we code every color with a distinct megahertz frequency,” said Cheng. “In this way, we can collect the diffuse photons within tens of microseconds and retrieve the spectrum through a one-to-one correspondence between the coding frequency and the color of light,” he added.

Because the scattered photons are collected without the need of a spectrometer, an image is produced on the order of seconds rather than minutes. “The key advance here is collecting signal photons with spectral resolution” noted Marcus Cicerone of the National Institute of Standards and Technology who was not involved in the study.

Using the new method, the researchers were able to follow the diffusion of topical vitamin E applied to live mouse skin, both in the epidermis and the sebaceous layer. They were also able to detect the adipose, fibrosis, and nuclei within a breast cancer tissue biopsy sample.

So far, the image produced is of the surface of exposed tissue but the researchers are now working to be able to create 3-D images deeper inside the tissue. To Cheng’s mind, one potential application is locating tumor cells during surgical tumor removal. With faster imaging, surgeons could check for tumor margins in the operating room, eliminating the need for additional surgery to remove additional tumor cells. Another application, according to Boppart, would be tracking the distribution of a drug within a tissue.

The speed of image capture, processing, and display, could all be improved, said Boppart. “One image still takes more than one minute to produce,” he said. “It will be important to further improve the timing if this is to be used for intraoperative imaging and also to make it more user friendly. Right now, it requires an expert in optics to operate.”