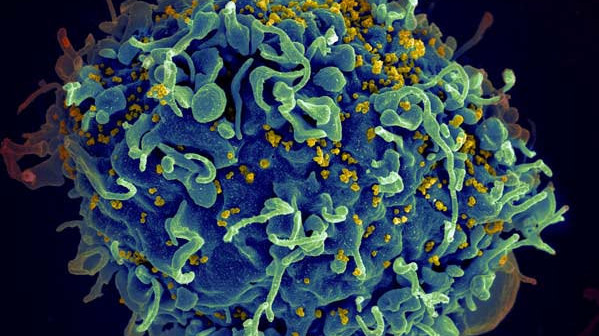 For HIV to develop into full-blown AIDS, the virus must deplete a subset of immune cells called CD4+ T cells, disabling an infected person’s adaptive immune system in the process. The details of precisely how HIV kills these T cells have only recently come to light, and a study published in Cell Reports last month (August 27) suggests the process differs from what many scientists expected. Researchers have found that the virus is most deadly to CD4+ T cells when it is transferred from active cells to resting ones.

“What our data show is that the major mechanism underlying CD4+ T cell depletion . . . requires cell-to cell transmission,” said study coauthor Warner Greene, an immunologist at the Gladstone Institute of Virology and Immunology and the University of California, San Francisco.

Although HIV researchers knew that intracellular transmission of the...

Five years ago, the group reported that when they infected human tonsil cells with HIV in culture, 95 percent of the CD4+ T cells that died did so before the virus had a chance to reproduce within them. Greene told The Scientist that these “bystander” cells are not active enough to facilitate viral replication; they typically die off without producing more HIV. In the current study, the team found that these are the same cells on the receiving end of intracellular transmission and they respond to incoming viral particles by kicking off a self-destructive intracellular immune pathway called pyroptosis.

“The target cell is really assaulted by a large number of viral particles,” said Walther Mothes, who studies microbial pathogenesis at Yale School of Medicine but was not involved in the present study. Once inside, the virus’s DNA acts as a danger signal that activates a protein called caspase 1, which can initiate cell death in several ways, including opening pores that disturb the cell’s ion balance and releasing inflammatory signals that recruit other immune cells. This, Greene said, could set off a “vicious cycle” that recruits new CD4+ T cells to the site of infection where they, too, can become infected. “What was originally designed as a defensive mechanism seems part and parcel of a grist mill occurring in tissues that destroys CD4+ T cells,” said Greene.

Mothes pointed out that this model of CD4+ T-cell death, while intriguing, must be confirmed in animal models of HIV using the viral strain that causes the most cases of AIDS.

Before this study, “a lot of people felt that the T cells were just getting exhausted,” said Deborah Anderson, a microbiologist at Boston University School of Medicine who was not involved in the work. “This is the first paper to describe this cell-death effect, and it needs to be expanded upon, but . . . it could explain the progression of HIV to AIDS.”

Greene said this death mechanism was largely missed by scientists in the HIV field because of a focus on circulating blood cells rather than immune cells embedded in tissues. “It turns out that blood CD4+ T cells are entirely resistant to this death pathway because they are too rested,” he said. “They are in a deep state of slumber.”

His group also found that when bloodborne CD4+ T cells were cultured with their counterparts from tonsils, the former cells were more likely to succumb to pyroptosis; the researchers are now working to determine why.

In the meantime, Greene and others are homing in on potential drug targets pinpointed by these studies. “What is really driving HIV pathogenesis is the combination of CD4+ T-cell depletion and inflammation,” Greene said. “This pyroptotic pathway joins both of those signature events.” Proteins in the pyroptosis pathway, such as caspase 1, could be potential therapeutic targets to prevent the transition from HIV to AIDS, he added.

The process of cell-to-cell viral transmission might also be interrupted. CD4+ T cells transfer HIV through connections called virological synapses that require interactions between several cell membrane proteins, such as ICAM-1 and LFA-1. Antibodies that block these connections already exist, and Greene plans to test them in animal models of HIV. However, he cautioned, blocking these proteins systemically could blunt the whole immune system.

Anderson said her lab is also working on antibodies to block cell-to-cell viral transmission at sites of infection, such as genital mucosal tissues. She has designed a vaginal ring that can locally release antibodies that bind free virions and block virological synapses between CD4+ T cells.

HIV researchers continue to better appreciate the role of cell-to-cell transmission in the long-term depletion of CD4+ T cells, said Anderson. Until recently, she added, “it’s been like a blind spot in the field.”