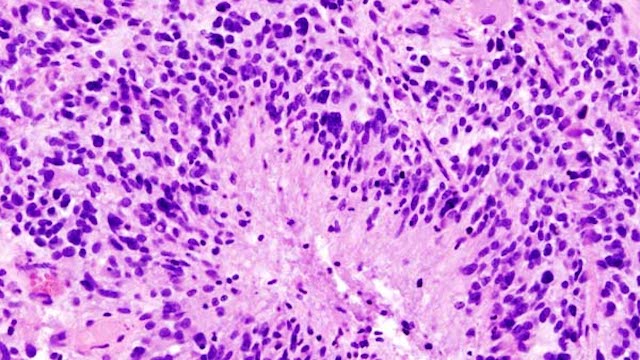 Cerebral glioblastomaWIKIMEDIA, KGHGlioblastomas, highly aggressive malignant brain tumors, have a high propensity for recurrence and are associated with low survival rates. Even when surgeons remove these tumors, deeply infiltrated cancer cells often remain and contribute to relapse. By harnessing neutrophils, a critical player in the innate immune response, scientists have devised a way to deliver drugs to kill these residual cells, according to a mouse study published today (June 19) in Nature Nanotechnology.

Neutrophils, the most common type of white blood cell, home in to areas of injury and inflammation to fight infections. Prior studies in both animals and humans have reported that neutrophils can cross the blood-brain barrier, and although these cells are not typically attracted to glioblastomas, they are recruited at sites of tumor removal in response to post-operative inflammation.

To take advantage of the characteristics of these innate immune cells, researchers at China...

The treatment was unable to completely prevent tumor recurrence, however. “The surviving mice were not fully cured during the studied monitoring period, and several islands of tumor cells were still detected in the normal brain parenchyma,” study coauthor Ran Mo, a professor of pharmaceutics at China Pharmaceutical University, writes in an email.

“Glioblastoma is a very aggressive tumor and the prognosis of patients is very poor. Despite all our great progress in medicine, we still haven’t made as big of a dent as we’d like to in terms of improving outcomes for [these] patients,” Michael Lim, a neurosurgery professor at Johns Hopkins University who was not involved in the study, tells The Scientist. “We need to think out of the box, and I applaud the authors for that.”

“The strength [of this method] is that neutrophils are the most abundant white blood cells, so it’s possible to collect them from a patient’s blood in significant amounts,” says Erwin Van Meir, a neuro-oncology researcher at Emory University who also did not participate in the work. However, he adds, in their animal models the authors used approximately ten times the number of neutrophils found in normal mouse circulation, meaning the amount of blood needed for this type of procedure in humans could be quite substantial.

Van Meir also points out that a limitation of this study is that “the brain tumor models they used are all flawed.” He explains that two of the models are disliked within the neuro-oncology community because they elicit an immune rejection response, and the third model is based on a human glioblastoma cell line that a 2016 study discovered was different from the original tumor source. “So it’s not clear at this stage how applicable this can be to humans,” he says.

Although additional studies are necessary to further validate this method, this strategy of using neutrophils to deliver drugs across the blood-brain barrier could also be applied to neurodegenerative diseases and other inflammation-mediated disorders. “Any disease that naturally attracts neutrophils could be targeted [with this method],” Van Meir says.

According to Mo, the team is currently preparing to launch preclinical tests of their neutrophil-mediated drug delivery system. “We expect our treatment strategy will give [glioblastoma patients] some hope of a better life,” says Mo. “But [there] is still a long way to go.”

Editor’s note (June 20): This story has been updated from its original version to clarify that the study was completed in mouse models of glioblastoma and to state that Erwin Van Meir is a neuro-oncology researcher, not a neuro-oncologist. The Scientist regrets any confusion.