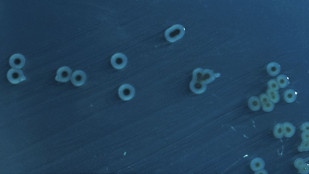 In a study published today (February 6) in Immunity, a team led by Manuela Raffatellu from the University of California, Irvine, reports having exposed mice with and without an immune signal molecule interleukin 22 (IL-22) to Salmonella infection. The researchers found that mice lacking IL-22 could combat the infection. But normal mice with IL-22 did not fare as well. It turns out that IL-22 enabled the invading Salmonella to establish itself by outmanoeuvring the competition: the commensal bacterium E. coli.

“[This study] takes several counterintuitive observations in the field and connects them to a coherent picture—a daring ‘Battle of the Bugs,’” said microbiologist Sebastian Winter...

Immune cells produce IL-22 in response to a variety of pathogenic attacks at mucosal surfaces, like the intestine. IL-22 in turn triggers the expression of several antimicrobial proteins, which successfully act against most pathogens, a prominent exception being Salmonella. While the IL-22 gene is known to be highly induced in Salmonella-infected mice, previous studies had shown that the pathogen could still colonize the intestine. So Raffatellu and her colleagues set out to decipher the connection between IL-22 and Salmonella infection.

The researchers pretreated 10 normal mice and 10 mice genetically engineered to lack IL-22 (IL-22-/-) with the antibiotic streptomycin to ensure that their guts would be inflamed—a prerequisite for Salmonella infection—before exposing them to the pathogen, orally.

Compared with normal mice, IL-22-/- mice showed significantly lower numbers of Salmonella in the colon 96 hours after infection. The researchers found that injecting the IL-22-/- mice with recombinant IL-22 restored Salmonella numbers to those observed in normal mice within the same timeframe.

“This result was surprising because IL-22 has been shown to play a protective role in the guts of mice against Citrobacter rodentium, and against vancomycin-resistant Enterococcus,” explained Denise Monack, an associate professor of microbiology and immunology at the Stanford School of Medicine, who was not involved in this work, in an e-mail to The Scientist.

The researchers found that both normal and IL-22-/- mice showed similar levels of inflammation after Salmonella infection. So they hypothesized that a change in the local microbial population might be influencing the success of Salmonella within the gut. While the two sets of mice had comparable microbiota sets before infection, the researchers did observe a dramatic post-infection shift: in the normal mice, Salmonella constituted about 50 percent of the total bacteria while the gut commensal E. coli was only around 9 percent; in IL-22-/- mice, Salmonella only accounted about 15 percent of the total, while E. coli made up about 40 percent. This suggested that Salmonella was outcompeting the resident E. coli in the guts of normal mice. 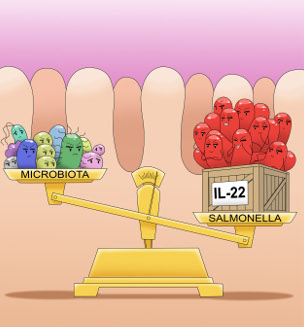 The researchers also found that the expression of some antimicrobial proteins was significantly reduced in IL-22-/- mice as compared with normal mice. The researchers hypothesized that Salmonella might be resistant to these proteins, such that in normal mice, the resident E. coli succumbed to these antimicrobials, allowing Salmonella to take over. And that’s exactly what happened.

“IL-22 induces the expression of two antimicrobial proteins, lipocalin-2 and calprotectin, which sequester iron and zinc, respectively, with the purpose of starving bacteria from these essential nutrients,” said Raffatellu. “However, Salmonella can acquire these metal ions via alternative pathways, and thus it evades these responses and thrives in the inflamed gut.”

To demonstrate this, the researchers infected both normal and IL22 -/- mice with an equal mixture of wild-type Salmonella and its derivative—with a mutation in the iroN gene, which makes it incapable of taking up iron from the alternate pathway. Wild-type Salmonella beat the mutant 12-1 in the normal mice, whereas in the IL22-/- animals, their numbers remained comparable even three days post infection.

“Salmonella are known to utilize many different strategies to gain a replication advantage in the intestine, but this new study is the first to highlight the important role of IL-22 in the fight between Salmonella and the host microbiota,” Stephen McSorley from the University of California, Davis, who was not involved in the study, told The Scientist in an e-mail.

Although the researchers found that IL-22 expression assists the pathogen Salmonella, they noted that it would be infeasible to prevent or control infection by blocking IL-22 entirely, as that could disrupt the broader host response. Rather, they suggested that future research focus on the alternative pathways by which Salmonella evades host defenses.

“In the future, it will be very important to determine whether IL-22, a key regulator of nutritional immunity, benefits other mucosal pathogens by similar mechanisms—[for example,] by inducing antimicrobial responses that suppress the growth of the microbiota, thereby enhancing their colonization,” said Monack.