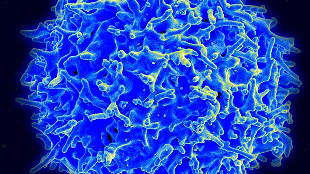 Scanning electron micrograph of a human T cellNIAID/NIHImmunotherapy has emerged as a promising way to tackle cancer over the last few years, and researchers at this year’s American Association for Cancer Research (AACR) meeting in Washington, DC, reported on several areas of progress in the field. In a plenary lecture on Sunday (April 7), Suzanne Topalian of Johns Hopkins University argued that despite the current dogma that cancer is a genetic disease, it can also be viewed as “an immunologic disorder.” Indeed, she said, “in many ways the adaptive immune system is an ideal anti-cancer therapy,” if it can be trained to recognize and attack tumor cells that it would otherwise tolerate.

Topalian described efforts to “release the brakes” acting on the immune system by targeting inhibitory receptors on T cells that tumor cells bind in order to evade attack. She presented evidence showing that plugging the programmed...

At an earlier AACR session, several pioneers in the field discussed a different approach to retraining the immune system to attack cancer cells. Renier Brentjens of the Memorial Sloan-Kettering Cancer Center in New York reported on early-stage clinical successes in acute lymphoblastic leukemia (ALL) with the use of chimeric antigen receptor T (CAR T) cells—an approach in which T cells are extracted from patients and genetically modified to express to CARs, which enables the recognition of particular antigens on certain cancerous B cells that the T cells would otherwise view as harmless. In a press conference, also at AACR, other researchers reported similarly encouraging results with CAR T-cell therapy used to treated children with relapsed ALL.

Brentjens pointed out that CAR T cells can be further modified to express cytokines that overcome inhibitory factors around the tumor. He described these as “armored" CAR T cells that can not only kill, but also “insert a factory into the tumor” to produce molecules that protect the immune cells from a hostile microenvironment.

Closing out the session, Carl June of the Abramson Cancer Center at the University of Pennsylvania, said that researchers are now working out which extra genes they can insert into T cells to further promote target specificity, potency, and persistence. He also cautioned that CAR T cell therapy requires researchers to tailor genetically modified cells to individuals patients, so it’s not currently practical for large-scale application.

CAR T cells are already potent and durable enough to be effective, he said, but to make them “for the masses,” researchers must create automated culturing systems. “We need to get robots to make them,” said June. “We need mass manufacture.”