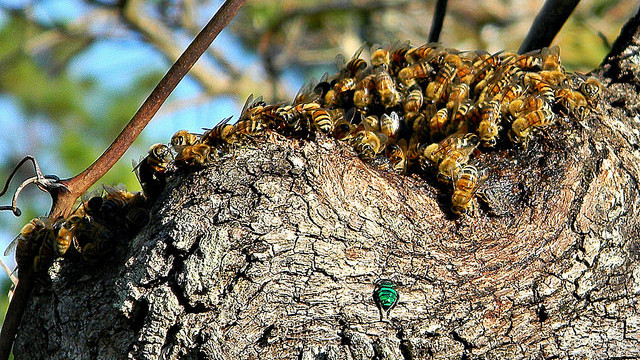 FLICKR, BOB PETERSONSocial corbiculate bees—which include honeybees, bumblebees, and stingless bees—share a core set of gut microbes, and likely inherited this insect-bacteria relationship through 80 million years of evolution, according to a study published today (March 29) in Science Advances. The bee-microbe association seems to have formed at the same time as the development of sociality among the corbiculate bees, researchers reported. University of Texas at Austin evolutionary biologist Nancy Moran and colleagues suggest that sociality may be key to the bees’ abilities to share certain microbes across generations.

“We showed that these three groups of social bees . . . have a shared core microbiome that has diverged and diversified over time,” coauthor Waldan Kwong, who is now a postdoc at the University of British Columbia, told The Scientist. “Overall, it seems that the social nature of this group of organisms is facilitating maintenance and...

The researchers “demonstrate that the acquisition of host-specific gut bacteria coincided with major transitions in bee evolution including to sociality,” Corrie Moreau, an evolutionary biologist and associate curator/professor at Chicago’s Field Museum of Natural History who was not involved in the study, wrote in an email. “This is a really, really interesting finding. . . . It begs the question of how important is the microbiome in driving sociality or other complex animal behaviors.”

“A lot of these insects that seem to depend on really dense gut microbiomes to perform functions for them—perhaps coincidentally, perhaps not—also seem to be eusocial,” said University of California, San Diego, postdoc Jon Sanders, who studies the evolution of animal-microbial symbioses and was not involved in the present study. “And the really intriguing thing about that, and it’s been speculated for some time, is that the eusocial lifestyle offers a really easily understood opportunity for direct transmission of a complex microbiome through generations.”

The gut microbiomes of some honeybees and bumblebees were previously examined, but “almost nothing was known about the great diversity of other species,” said Kwong. Those initial studies suggested, as Moran and colleagues proposed in 2011, that the bees may have inherited a core set of gut bacteria from a common ancestor.

To further test this hypothesis, and to include other bees, Moran, Kwong, and colleagues collected 25 corbiculate bee species and two species of solitary bees, representing populations found across four continents. The researchers identified the gut bacteria present in each sample by sequencing the 16S ribosomal RNA, a common method for identifying microbes. They found that, among species, microbiome differences did not correlate with geography. For example, Eastern honeybees sampled from five different countries had statistically indistinguishable microbiomes, whereas the microbiomes of different bee species from within the same country were distinctive. The microbiomes did, however, correspond to host phylogeny: bee species that were more closely related in an evolutionary sense also had more similar microbiomes, the team showed.

Comparing the corbiculate evolutionary tree with the gut microbiome of each species examined, the researchers found that their data were consistent with the idea that the common ancestor of the social corbiculate bees acquired five particular phylotypes of gut bacteria, which it then passed on—with some gains and losses among different species—to present-day insects.

The results of the present study make a case that sociality enables the transmission of a core microbiome over millions of years, he noted. But researchers can’t rule out the idea that some factor that emerged at the same time as sociality produced the correspondence between the microbiomes and phylogeny, Sanders added. “If they had been able to show similar patterns across many independent evolutions of bee sociality, it would be a stronger case.”