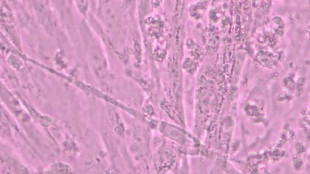 But reprogramming techniques are still notoriously inefficient. At best, they can convert around 10 percent of adult cells into iPSCs; often, they only manage around 0.1 percent. Worse still, the process seemed random, and it was impossible to predict which cells would be successfully reprogrammed.

This roadblock may be a thing of the past. Jacob Hanna at Israel’s Weizmann Institute of Science has found a straightforward way of producing iPSCs with almost 100 percent efficiency. Hanna’s team simply disabled a single gene, Mbd3, which seems to repress pluripotency.

Graduate students Yoach Rais, Asaf Zviran, and Shay Geula initially worked with mouse epiblast stem cells (epiSCs), which are found in late embryos and are only partially pluripotent. The team reprogrammed these into a fully stem-like state using the standard quartet of genes—the so-called Yamanaka factors. They also tried to make the process more efficient by silencing a variety of different genes. One seemed to do the trick, Mbd3.

By switching off Mbd3, or by working with cells that lacked the gene, the team reprogrammed blood and skin cells from mice, as well as skin cells from human adults, with almost complete efficiency in just seven days. The resulting cells were indistinguishable from embryonic stem cells in terms of gene expression.

Hanna said the discovery may come as a surprise to other scientists, since there have been confusing reports from earlier studies about whether deleting Mbd3 would yield more or fewer iPSCs. Indeed, George Daley, a stem cell biologist from Harvard Medical School who was not involved in the study, has also tried to disable Mbd3 while making iPSCs, but didn’t see any improvements in efficiency.  “We are eager to try to replicate [the results],” he said. “Perhaps there was something different about our protocol.”

Meanwhile, Paul Knoepfler, a stem cell biologist from the University of California, Davis, pointed out that the need to improve efficiency has waned since the early days of the iPSC craze. “[It is] not that important any more. Even a relatively poor efficiency of say 0.001 percent is good enough to generate dozens of iPSC colonies,” said Knoepfler, who was not involved in the study. “Even for clinical use, you may only need one high quality iPSC colony per patient.”

To Knoepfler’s mind, the study’s biggest strength was showing that Mbd3 helps to control the fate of cells. “Characterizing repressors of pluripotency is just as interesting as finding stimulators, although the latter has very much been the focus of the field,” he said.

Mbd3 is part of the NuRD complex—a set of proteins that silence genes by changing the way in which DNA is packaged. Although active in fertilized eggs, Mbd3 levels fall during the earliest stages of embryonic development, and then rebound later. This temporary absence could give a small population of stem cells the chance to expand, before then allowing them to differentiate into mature cell types.

Hanna’s team also showed that Mbd3 interacts with the four Yamanaka factors. This quartet activates several genes that start the reprogramming process, but they also attract Mbd3, which switches off the same downstream genes.

Without lifting this repression, producing iPSCs is like “trying to drive a car while stepping on the gas and brakes at the same time,” said Hanna. “The car can succeed, but it’s not optimal.” For the car to run smoothly, the Mbd3 brake must be removed before the Yamanaka factors are added.

But Knoepfler said that this idea “remains highly speculative,” as Hanna’s team tested its cells using extremely large amounts of both Mbd3 and the Yamanaka factors. It’s not clear how the proteins interact with one another at their normal cellular levels.

Next, Hanna aims to see whether silencing Mbd3 could improve the quality of iPSCs along with their quantity. In recent years, scientists have shown that these cells can pick up mutations during the reprogramming process, or keep a memory of their past lives as adult cells—problems that throw a wet blanket on their medical potential. Hanna said he suspects producing the cells without Mbd3 could help researchers avoid such setbacks.

“Those results will be key,” said Joseph Ecker from the Salk Institute for Biological Studies. “That said, this is a major breakthrough. They’ve uncovered and removed a major roadblock to iPSC generation.”