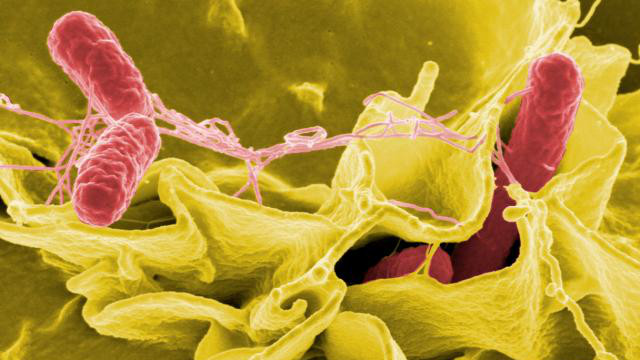 WIKIMEDIA, NIAIDIntestinal inflammation caused by Salmonella infection activates bacteriophages within the bacteria to spread genes throughout the colony, according to a report published in Science today (March 16). The findings reveal how genetic traits encoded in the viruses, such as increased virulence, can rapidly emerge in pathogenic bacteria during infection.

“It is a really nice piece of work that elegantly demonstrates the influence of inflammation on bacteriophage activity in the gut,” medical microbiologist Chloe James of the University of Salford in Manchester, U.K., who was not involved in the work, wrote in an email to The Scientist.

“It’s a very high-quality paper,” echoed Rob Kingsley of the Institute of Food Research in Norwich, U.K., who also did not participate in the research. “It shows for the first time that something that is very important for the evolution of a pathogen—phage transfer—is triggered by the action of the pathogen...

Some bacteriophages—bacteria-infecting viruses—kill their hosts immediately. Others take up residence long-term. These temperate phages ensure their retention within a bacterial host by providing the bug with one or more genetic benefits, such as antibiotic resistance or increased virulence. But when the host bacterium is in trouble, it’s a different matter: the phage rapidly replicates, kills the host cell, and heads off to infect nearby healthy bacteria. By transferring their beneficial genes to new hosts in this way, the viruses “play a key role in bacterial evolution,” wrote James.

The cellular stresses that might prompt a phage to abandon its bacterial ship have been studied at length in vitro, but minimally in vivo, said microbiologist Wolf-Dietrich Hardt of the Swiss Federal Institute of Technology in Zurich who led the new research. It is known that phage transfer can occur between bacteria in, for example, an animal’s gut, “but how this really works, what drives this, and how efficient it is has remained a black box,” he said.

To answer these questions, Hardt and colleagues infected mice with two strains of Salmonella bacteria. One strain (donor) contained a phage that encodes a virulence factor, SopE, which helps the bacteria invade host gut cells. The other (recipient) did not. The team introduced small, equal doses of the two strains into the animals to produce an intestinal infection. After as few as 24 hours, phage transfer of the sopE gene from the donor to the recipient strain was apparent. “It was super efficient,” said Hardt.

So what prompted the transfer? Inside an animal’s gut, Salmonella “gets a severe beating” from the host innate immune system, said Hardt. “They are in real trouble.”

His team therefore hypothesized that the inflammatory environment might be the phage’s signal to escape. To test this idea, the researchers created non-virulent versions of the two Salmonella strains. These strains were able to colonize the gut for approximately three days before causing inflammation, Hardt explained. During this non-inflammatory period, sopE transfer was dramatically reduced, the team showed.

“The study suggests that vaccination can not only protect against bacterial disease; but also reduce the ability of bacteria in the body to transfer genetic material that might enhance virulence or resistance to treatment,” wrote James.

This previously unappreciated benefit of vaccination should be considered in future immunology studies, Hardt suggested.

Whether vaccination strategies would alter in the light of these experiments is uncertain, said Vincent Fischetti of Rockefeller University in New York City who was not involved in the work. After all, he added, vaccines are already known to be “the best way to control infection, no question about it.”

However, the findings do provide “a better understanding of what’s occurring . . . in the gut,” said Fischetti. The next questions, he added, are “what are the consequences [of phage transfer]?” and “How do these events play a role in disease?”