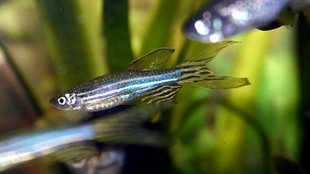 Wikimedia, Marrabbio2The secret to zebrafish’s remarkable capacity for repairing their brains is inflammation, according to a report published online today (November 8) in Science. Neural stem cells in the fish’s brains express a receptor for inflammatory signaling molecules, which prompt the cells to multiply and develop into new neurons.

“This is a very interesting paper,” said Guo-li Ming, a professor of neurology and neuroscience at The Johns Hopkins University in Baltimore, who was not involved in the study. “It is well known that fish have this ability to self-repair, and this paper provides a mechanism,” she said.

Zebrafish, like many other vertebrates, are able to regenerate a variety of body tissues, including their brains. In fact, said Michael Brand, a professor of developmental genetics at the Technische Universität in Dresden, Germany, “mammals are the ones that seem to have lost this ability—they are kind of the odd...

Last year, Brand and his team discovered that radial glial stem cells are responsible for producing new neurons during brain regeneration in zebrafish. But they didn’t know what prompted these cells to spring into action. Inflammation seemed a good candidate, explained Brand, as it arises as an immediate response to injury.

Brand and his colleagues introduced Zymosan A—an immunogenic factor derived from yeast—into the brains of zebrafish to induce inflammation in the absence of injury. They found that, just like brain injury, Zymosan A induced significant glial cell proliferation and new neuronal growth. In fish with suppressed immune responses, however, brain injury did not induce regeneration, further suggesting a role for inflammation.

Next, the team hunted for genes that were expressed differently in radial glial cells between injured and uninjured brains. They found a number of candidates, but “one caught our attention in particular,” said Brand. It was the cell surface protein cysteinyl leukotriene receptor 1 (Cystlr1), which binds signaling molecules called leukotrienes that are produced by white blood cells, or leukocytes. “We had found in our previous study that one of the early responses in a lesioned brain is the massive influx of leukocytes to the lesion site,” explained Brand, so the the leukotriene receptor seemed like an obvious choice for further investigation.

Sure enough, blocking the activity of Cystlr1 in the fish reduced their brains’ regenerative potentials. Moreover, introducing leukotriene molecules alone into fish brains recreated the glial cell proliferation and neurogenesis seen after brain injury or Zymosan A treatment.

“It wasn’t known that this receptor is expressed on adult neural stem cells,” said Brand. “It is generally thought of as an immune mediator . . . so what we’ve found, essentially, is a very novel role of this signaling pathway.” Brand and colleagues now plan to study whether the leukotriene pathway is present in the mammalian brain and, if so, how it differs.

The effect of inflammation, itself, differs considerably between zebrafish and mammals. For one thing, said Ming, inflammation in the brain inhibits regeneration in mammals because it induces glial cells to form a scar, rather than new neurons. Furthermore, said Phillip Popovich, a neuroscience professor at the Ohio State University, who was not involved in the study, injury or Zymosan A- induced inflammation clears up within a matter of days in zebrafish brains, but persists much longer in mammalian brains—for many weeks or even months.

Despite the differences, the new findings do offer a starting point for comparison, said Popovich. “The zebrafish model could provide a unique opportunity for identifying key molecular signaling pathways and biologically active compounds associated with tissue injury that are required to promote regeneration, but that are missing [or dysfunctional] in mammals.”