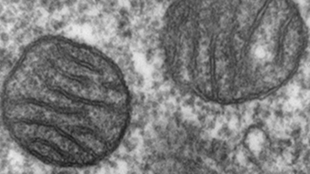 “It’s a provocative set of findings,” said Richard Miller, who studies the genetics of aging at the University of Michigan and was not involved in the research. Although previous work had indirectly suggested that changing mitochondrial function affected lifespan, “this is the first clear demonstration [that it] extends mouse lifespan,” Miller added.

It’s well known that mitochondria are linked to health. Some evidence suggests that inhibiting mitochondrial function can be harmful—as in the case of diabetes or obesity—but earlier data from nematodes and fruit...

In order to identify genes linked to longevity in mammals, researchers led by Johan Auwerx at the Swiss Federal Institute of Technology in Lausanne combed the genomes of the BXD family of mouse strains. The average lifespan of BXD mice range from 1 year to almost 2.5 years. The researchers were able to link 3 genes to longevity variability, including mitochondrial ribosomal protein S5 (Mrps5), which encodes a protein integral to mitochondrial protein synthesis. They found that BXD strains with 50 percent less Mrps5 expression lived about 250 days longer than BXD mice with more robust Mrps5 expression.

Turning to the nematode Caenorhabditis elegans to tease out the genes’ role in controlling lifespan, the researchers found that using RNAi to knock down mrps-5 and other mrp genes increased the worms’ month-long lifespan by up to 60 percent. This suggested that inhibiting their mitochondrial function was in fact enhancing their longevity.

When Auwerx and his colleagues looked closer, they found that reducing mrps-5 expression in the worms altered the ratio of mitochondrial- versus nuclear-derived proteins involved in ATP synthesis, a situation they termed “mitonuclear protein imbalance.” This, in turn, activated the protective mitochondrial unfolded protein response (UPR). This explains how reducing mrps-5 expression can actually increase lifespan, said Auwerx. The unfolded protein response is “reparative, adaptive, and makes better mitochondria,” which help retard aging. Reducing expression of a gene involved in this stress response reversed the lifespan extension seen in worms with mrps-5 knocked down.

Though Auwerx and his team haven’t yet tested their hypothesis by mutating mitochondrial genes in mice, the study is “supportive of the idea that inhibiting mitochondrial function might extend lifespan”—even in mice, said Kapahi.

But mitochondrial ribosomal proteins are not to be trifled with. “There are a number of well-defined severe disorders in humans, including neonatal lethality, due to defects in those exact proteins,” observed Michael Ristow, who studies energy metabolism at the Swiss Federal Institute of Technology in Zurich. Additionally, long-term doxycycline use is toxic to humans, and rapamycin suppresses immune function so effectively that it’s given to transplant patients to prevent tissue rejection.

If mitochondria can be targeted to influence lifespan, the interventions may be tissue specific or restricted to a particular developmental window. Auwerx and his colleagues found that mitochondrial responses to doxycycline depended on tissue of origin, and knocking down mrps-5 after early development no longer affected nematode lifespan. This mirrors work in mice showing that caloric restriction most affects lifespan if it occurs within the first few weeks of life, said Miller.

Auwerx’s group is beginning to cast a wider net, looking to see whether mitonuclear protein imbalance could explain longevity induced by other means, such as caloric restriction. Auwerx hopes that the work will aid in designing a drug intervention “to pump up this response via pharmacological tools.”

In the meantime, he’s optimistic that his team has identified a “common thread” demonstrating that longevity is not affected so much by inhibiting or stimulating mitochondria, but how the organelles “deal with proteins.”