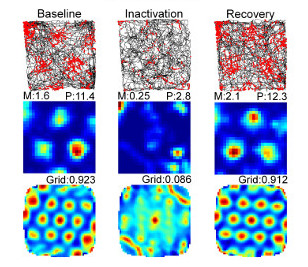 While it was known that grid cells may need input from place cells in the hippocampus, it was not known whether head direction cells supported...

“The findings are expected but still important in that they verify core ideas of current models of how grid cell patterns are generated and maintained,” Edvard Moser of the Norwegian University of Science and Technology (NTNU), who—along with his wife, May-Britt, also of NTNU, and John O’Keefe of University College London—won the 2014 Nobel Prize in Physiology or Medicine for his work on grid cells, told The Scientist in an e-mail.

Today, a decade after grid cells were first identified, “we don’t really know what these cells are doing, functionally,” said study coauthor Jeffrey Taube, a professor of psychological and brain sciences at Dartmouth. Each grid cell fires when an animal is in a certain location in a space. The compilation of these locations produces a grid-like map for each cell.

Along with postdoctoral fellow Shawn Winter and then graduate student Benjamin Clark, Taube severed the connections between head direction and grid cells in live rats by infusing the sodium channel inhibitor lidocaine into the thalamus. Lidocaine temporarily reduced or eliminated the grid-like pattern of grid cell firing in the animals, suggesting that signals from head cells are necessary for grid cells to function. Permanently damaging less than 85 percent of the thalamus region containing head direction cells still resulted in grid-like firing, but when more than 85 percent of this area was damaged, no cells with grid activity were found.

The researchers also found that the grid-like firing pattern was also disrupted in the presence of EEG-recorded theta brain waves. These sinusoidal waves of electrical activity in the brain were previously known to be necessary for the firing of grid cells. Because injection of the sodium channel inhibitor did not appear to disrupt these waves, the dysregulation of grid cell activity observed as a result can be directly attributed to the loss of the head direction cell signal, said Taube.

Leutgeb said an important next step will be repeating the lidocaine experiments using a more head direction cell-specific technique to show that these cells are selectively affected.

“The findings support the view that head direction cells are necessary for the periodic firing structure of grid cells,” wrote Moser, who noted he was surprised to see that damage to less than 85 percent of the anterior thalamus did not hamper grid cell activity.  “This must imply considerable redundancy in the . . . network. Grid cells and head direction cells may be generated from only a small number of the available directional inputs.”

Moser added that the results in rats raise the question of how important is an animal’s head direction in sensing the body’s movement and whether the body’s directional movement can be inferred from head cell signals or whether additional sensory inputs are required.