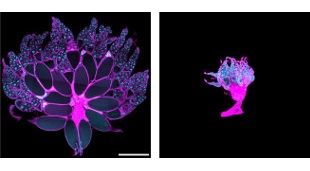 Ovaries from normal and tumor-bearing flies, showing tissue wasting induced by the tumor.DAVID BILDER AND ALEJANDRA FIGUEROA-CLAREVEGA/UC BERKELEYMany cancer patients suffer a wasting syndrome, called cachexia, where muscle and fat tissues are destroyed throughout the body. A tumor-secreted protein that inhibits systemic insulin signals may be one factor that drives this wasting, according to two studies on fruit fly models of cancer.

The results—published today (April 6) in Developmental Cell—implicate Impl2, a Drosophila homolog of mammalian proteins that antagonize insulin signaling, as a key player in systemic wasting. These studies are also the first to generate fruit fly models that can be used to elucidate the mechanisms underlying cancer-related cachexia. “Part of what’s exciting is the results of these papers, but what’s also exciting is that we now have a new model of cachexia that can be used to go deeper in terms of mechanism and therapeutics,”...

Muscle wasting and loss of energy stores occurs in cancer-related cachexia but can also be triggered by severe starvation, infections, or in response to traumatic injuries. Although previous studies had recreated this degeneration in fruit flies transplanted with tumors, little was known about the molecular mechanisms through which a local tumor might set off widespread tissue breakdown.

To understand the process, Norbert Perrimon of Harvard University and his coauthors activated Yorkie (yki), the Drosophila homolog of human oncogene YAP1, which led intestinal cells to overproliferate in flies. Six to 12 days later, this localized cell growth caused fat stores and muscle tissue to degenerate. This degeneration was accompanied, in muscle, by a decrease in the expression of genes involved in carbohydrate and protein metabolism, and a significantly higher level of circulating sugars, indicating hyperglycemia.

Analyzing the fly’s transcriptome further revealed that Impl2 expression in the overproliferating intestinal cells was approximately 70-fold higher six days after yki was induced. Expression of this protein in muscle, fat, ovaries, and other tissues was no different than that seen in the tissues of control animals. Interfering with Impl2 expression prevented cachexia-like wasting, indicating that this tissue-specific secreted factor could mediate a system-wide breakdown of energy stores.

This study used one oncogene homolog to activate Impl2, but it’s possible other oncogenes could exert similar effects, said study coauthor Young Kwon of Harvard. Drosophila Impl2 functions much like mammalian insulin growth factor (IGF) binding proteins, which block insulin signaling. Some studies have suggested that these proteins are upregulated in cancers, “but their role in cancer cachexia is not well studied,” said Kwon. “We can now screen the fly genome to see [which proteins] regulate the wasting process.”

Rather than activate a specific oncogene, Alejandra Figueroa-Clarevega and David Bilder of the University of California, Berkeley, transplanted tumors into fruit fly abdomens to induce cachexia-like wasting. They found that malignant tumors—but not benign growths—induced a massive breakdown of fat, muscle, and gonadal tissue in the fruit flies studied. “Benign tumors can grow to be larger than malignant tumors, but even when they are extremely large, they don’t induce this wasting,” said Bilder. That suggested “it wasn’t just the size of the tumor that was soaking up all sorts of nutrients,” he added. “Instead there was something the malignant tumor was actively producing to cause the wasting.”

A search through the transcriptome for this secreted factor led these researchers to the same suspect: Impl2. Tumors secreting Impl2 reduced insulin-signaling pathways in other tissues. In subsequent experiments, the researchers found that even in the absence of a tumor, simply overexpressing Impl2 in intestinal cells could trigger the degeneration of distal tissues. Depleting Impl2 in the tumor tissue, however, could prevent signs of cachexia.

In both studies, flies with tumors did not consume significantly less nutrients than healthy animals. “One of the key things about cachexia is that you can’t treat it by just feeding patients or pumping nutrients into them,” said Cagan. “They see the same thing with these flies. That’s a very unusual and specific syndrome, and strongly suggests that they’re on the right track.”

Whether mammalian homologs of Impl2 play similarly critical roles in human cancer cachexia has yet to be confirmed. Nonetheless, “these papers represent important work,” epidemiologist Mary Ann Honors of the University of Minnesota, who studies cachexia but was not involved in the work, wrote in an e-mail to The Scientist. “Our current inability to treat cancer cachexia is largely due to a poor understanding of the mechanisms that contribute to its development. The identification of Impl2 as a potential player . . . could improve our understanding of this disease.”