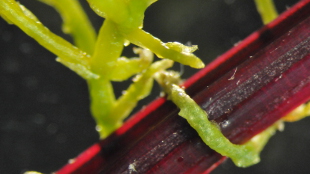 Parasitic Cuscuta plant attacks a sugar beet plantVIRGINIA TECH COLLEGE OF AGRICULTURE AND LIFE SCIENCES Parasitic plants make connections with other plants’ stems, reaping the benefits of their hosts’ water and nutrient supplies. Nucleic acids, proteins, and metabolites can also be passed through these connections, made by a specialized organ of the parasite called a haustorium. Jim Westwood of Virginia Tech and his colleagues had previously found that tens of different messenger RNAs (mRNAs) from a host tomato plant can move to the parasitic plant, Cuscuta pentagona.

But the extent of the shuffling of RNAs from host to parasite has not been fully appreciated. In a study published today (August 14) in Science, Westwood’s team shows that thousands of different mRNAs are exchanged from Cuscuta to two of its hosts—the widely studied tomato plant and Arabidopsis thaliana—and vice versa. This is the first example of such a...

“The high volume of transcripts being exchanged is surprising,” Consuelo De Moraes, a plant biologist and ecologist at the Swiss Federal Institute of Technology in Zurich who was not involved in the work, told The Scientist in an e-mail. “The movement and functions of mobile RNAs in plants is a relatively new and exciting topic in plant biology with a lot of exciting ‘what ifs’ to be explored. This paper extends the frontiers of possibilities to plant-plant interactions.”

“We’ve known for a while that parasitic plants take up a lot of nutrients, [and macromolecules] from host plants but what this paper shows is the real extent to which this happens. Upwards of one percent of the RNA transcripts in the parasite are from the host and vice versa and that is really dramatic,” said John Yoder who studies plant communication at the University of California, Davis, and was not involved with the study.

Westwood and colleagues collected the tissue that physically connected Cuscuta to either of its two hosts, as well as unattached Cuscuta tissue, sequencing the transcriptomes of these samples. They used a bioinformatics approach to distinguish the RNAs of Cuscuta from those of either Arabidopsis or the tomato plant, taking advantage of the fully sequenced genomes of both host species.

The parasitic plant tissue contained approximately 1 percent of Arabidopsis RNA, while Arabidopsis tissue had 0.6 percent Cuscuta RNA—evidence of bidirectional movement of mRNAs between the two species. The researchers found evidence of mRNA transfer between Cuscuta and tomato, although to a lesser extent. A total of 45 percent of the genes expressed in Arabidopsis were found within Cuscuta tissue while only 1.6 percent of the tomato’s genes were observed. Many of the RNAs transferred were from highly transcribed genes. While there may have been a slight difference due to better sampling from Arabidopsis, according to Westwood, this could not account for the full disparity of RNA transfer.

RNAs are used for regulating communication between the different tissues within a plant, “like sending a letter through the plant to a specific address,” said Westwood.  “We thought there would be a similar spectrum of RNAs used for the parasite-host communication going on through the plants’ vascular systems. But instead, we found a whole cross section of RNAs suggesting that the parasitic relationship is something quite different from the normal cell-cell plant interaction.”

The team attempted to analyze the functions of the transferred RNAs for patterns, but so far, it’s not clear whether these mobile RNAs serve specific functions in either the host or the parasite. Westwood’s laboratory is now trying to tease out whether there is meaning in the types of RNAs that are transferred and whether there are any proteins or protein-RNA complexes involved in this shuttling. It’s also not clear whether the difference in the exchange rates observed for the two hosts reflects unique connections between each parasite-host pair.

The passive transport of RNAs as the parasite takes up materials from its host is a plausible explanation for the transfer. But, the reverse flow—from the parasitic plant to the host—is harder to explain, wrote Neelima Sinha, who studies genomic adaptations of plants at the University of California, Davis and was not involved in the work, in an e-mail to The Scientist. “The bi-directionality argues for an active, regulated process, and that is very interesting.”

De Moraes agreed. Although bi-directional exchange of solutes has been previously shown, the movement of mRNAs from the parasite to the host during later stages of the infestation is surprising, she said, and implies a meaningful exchange of information.

The bi-directional RNA movement also provides a novel mechanism for horizontal gene transfer and for the transfer of genes between plants, according to Yoder. “This means that the parasite can act as a bridge, facilitating movement of genetic material between unrelated, non-parasitic plants.”

For Yoder, the work is another example of how organisms are not isolated and that even unrelated species commonly exchange genetic information.

According to Westwood, the results also have a practical implication: weed control. Taking advantage of this RNA movement, it could be possible to create a transgenic host plant that expresses a silencing RNA, that, if transferred to the parasite could prevent parasitic growth on important food crops.