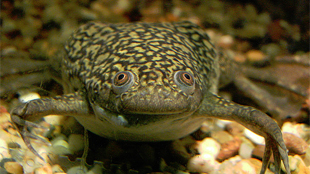 African clawed frog, by Ben RschrIn the final weeks of 2012, it seemed that Santa had brought an early Christmas present to a team of Russian scientists—a treasure trove of antimicrobial peptides (AMPs) in the skin of a frog. By screening the Russian brown frog—an edible animal once dipped in milk to prevent it from souring—Antony Lebedev from Moscow State University identified 76 chemicals that prevented the growth of common bacteria like Salmonella and Staphylococcus. The press release for the study described these substances as “potential medical treasures.”

Rarely a month goes by without a new paper describing new chemicals from frog skins. They are announced by the handfuls, or sometimes hundreds at a time. Since the 1990s, they have been touted as promising leads for the next generation of antibiotics.

But despite decades of work, and thousands of candidate compounds, no amphibian peptides have...

There is a clear need for new antibiotics. Bacteria are evading even the most potent front-line drugs, and resistance continues to rise. Meanwhile, the production of new drugs has slowed to a crawl since the golden age of antibiotic discovery in the 1940s and 1950s. In the last 50 years, just one antibiotic of an entirely new class has made it into clinical practice, and many pharmaceutical companies have stepped out of the ring altogether.

Progress stalled because scientists picked all the low-hanging fruit. In the 1940s, Selman Waksman discovered streptomycin by systematically testing the compounds that soil microbes used to outcompete each other.  Waksman coined the term antibiotics, and went on to discover over 20 such chemicals using the same method. “That platform collapsed in the 1960s due to overmining,” said Lewis. “Companies would find tetracycline a thousand times before they found something new,” added Livermore.

In the quest for new antibiotics, some scientists turned to frogs, and for good reason. Most of our infections occur across mucus membranes, such as those that line our digestive, respiratory, and urinary tracts. Because a frog’s entire skin is essentially a moist mucus membrane, they presumably need something to protect them against the constant barrage of pathogens. “People have legitimately asked why frogs don’t turn into bags of pus,” said David Livermore from the University of East Anglia. “And the answer is that they have many AMPs that protect them.”

The AMP that came closest to success—a compound called magainin, derived from the skin of the African clawed frog—passed through Phase II clinical trials for patients with diabetic foot ulcers, but the drug failed to get approval from the US Food and Drug Administration. That was in 1999. “That field is pretty much dead, now,” said Lewis. “Only academia keeps it alive.”

The problem, said Livermore, is that amphibian AMPs tend to be large peptides that make for poor drugs. Some get metabolized too readily, while others trigger immune reactions. Their size also makes it difficult  to synthesize them in large enough quantities. “It’s proved very hard to produce anything that’s clinically effective and commercially viable,” Livermore said.

Other groups have identified bacteria-killing compounds from sources as diverse as clay, alligator blood, cockroach brains, panda blood, and ocean mold. But these discoveries—based primarily on in vitro tests of new compounds—provide a false sense of security, Lewis said. “That there is no shortage of antibiotic sources is bogus. That’s where the main problem is: we don’t have reasonable sources of new compounds,” he said—sources that are likely to lead to successful new drugs.  “A reasonable starting point for any story worthy of publishing is to have an effective compound in a systemic mouse model of infection. Once you cross that barrier, then it makes sense to talk about it.”

As far as what those reasonable sources will be, Livermore thinks that bacteria are more likely to yield new antibiotics than frog skin. “There’s a long catalog of small molecules from bacteria that prove to be successful antibiotics, but no success from large peptides, which is what you’d more likely find from frogs or insects,” he said.

While soil bacteria have yielded most of their secrets, those in more exotic locales, such as caves and deep-ocean sediments could harbor new classes of drugs. And, Lewis noted, such discoveries are now supported by technology that allows researchers to grow previously “unculturable” bacteria in the lab. “Looking at bacteria from odd ecological niches you’d hope will give you a new small molecule like penicillin,” said Livermore.