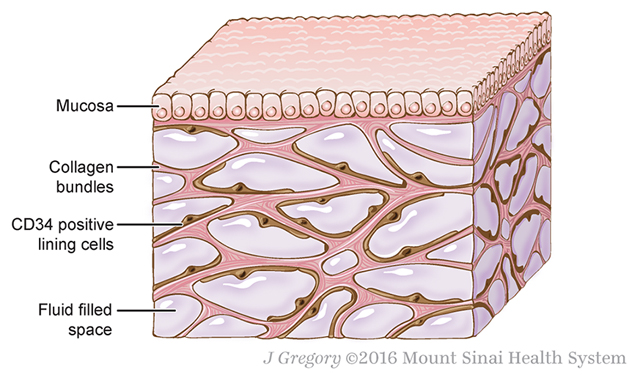 Illustration of the interstitium, fluid-filled spaces supported by a network of collagen bundles, lined on one side with cellsJILL GREGORY, REPRINTED WITH PERMISSION FROM MOUNT SINAI HEALTH SYSTEM, LICENSED UNDER CC-BY-ND.For years, scientists have fixed tissue and looked at it under the microscope in order to better understand the body. In a study published yesterday (March 27) in Scientific Reports, a team of researchers used a new in vivo microscopy technique to present evidence that the human interstitium—the space between cells—is more like a matrix of collagen bundles interspersed with fluid than the densely-packed stacks of connective tissue it appears to be in fixed slides.

News reports have suggested that this interstitium could represent a widespread organ in the body, whose connections with the lymphatic system might be involved in cancer metastasis. While researchers not involved in the study agree that the interstitium likely plays diverse...

“It is fair to say that histologists [and] pathologists have long known that there is an interstitial space and that it contains fluid,” Anirban Maitra, a pathologist at the University of Texas MD Anderson Cancer Center who did not participate in the work, writes in an email to The Scientist. “The claim that it is a hitherto undiscovered organ, and the largest one ever at that, seems a stretch,” he cautions.

“Most biologists would be reticent to put the moniker of an ‘organ’ on microscopic uneven spaces between tissues that contain fluid. By this definition, the abdominal cavity and pleural spaces should be discrete organs” too, says Maitra. 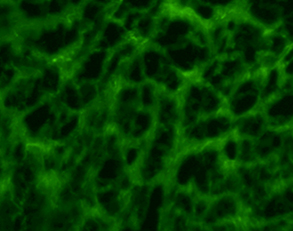 According to coauthor Neil Theise, a pathologist at New York University’s School of Medicine, coauthors and physicians Petros Benias and David Carr-Locke consulted with him after they saw something unexpected while using a technique called probe-based confocal laser endomicroscopy to assess patients’ bile ducts for cancer spread. The endoscopic method allows for the exploration of living tissues within the body, rather than needing to wait for fixed slides. Benias and Carr-Locke noticed that bile duct tissue appeared as a net-like pattern that did not correspond to any anatomical structure that had been previously described.

When Theise looked at fixed bile duct tissue under the microscope, he didn’t see the pattern. But when the team examined live and freshly frozen bile ducts from 13 patients, there it was, an extended latticework of tissue. Upon further scrutiny, they determined that the lattice is composed of collagen bundles that support fluid-filled spaces and are lined irregularly with flattened cells that produce two markers, one endothelial and one mesenchymal.

“I was trained, and I’ve taught residents that I’ve trained, [that] the tissue tears a little bit when you’re making a slide,” says Theise. “We thought this was artifact. It turns out the dense connective tissue appearance was the artifact. These tiny cracks are actually what’s left of the spaces after the fluid has drained out when you fix the tissue.”

“I am not questioning whether these spaces can be paths for egress of cancer cells to lymph nodes—they very well might be,” writes Maitra. “That would still require additional experiments to prove conclusively, but it is certainly within the realm of possibility.” 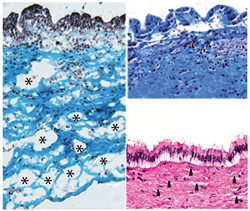 The study makes a good point that it’s important to consider to what degree the microscopy techniques currently in use reveal a true-to-life picture of what is happening in vivo, Radu Stan, a biologist at Dartmouth’s Geisel School of Medicine who did not participate in the work, tells The Scientist. He adds that the concept of a fluid-filled matrix is not “earth-shattering,” and that sectioning and imaging unfixed tissue as the authors did, which could tear and create artifacts, presents limitations.

“The paper presents an interesting description of a possible novel microanatomic structure of  ‘pre-lymphatic’ or ‘interstitial’ spaces in normal tissues, which may play a role in normal function as well as tumor metastasis,” Xiaoyin “Sara” Jiang, a pathologist at Duke University School of Medicine in North Carolina who was not involved in the work, writes in an email to The Scientist. She cautions that the findings are limited to a fairly small number of patients and that most of the tissues the authors looked at outside of the bile duct were fixed, not live or freshly frozen. Overall, the work opens the door to additional study—in the hands of another group, as well as studying pCLE in other tissues—rather than being definitive, she writes.

Theise and colleagues are already investigating the developmental anatomy of the interstitium in mice, as well as looking more in depth at how it appears in other tissues in both animal models and people. Other future directions include the role of the interstitium in diseases, including cancer and liver disease.