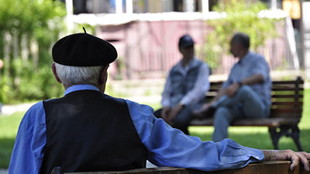 WIKIMEDIA, BURIMThe evidence is mounting that elderly people who are socially isolated or lonely tend to die earlier than those who are more highly networked. According to a study published today (March 25) in the Proceedings of the National Academy of Sciences, both social isolation and loneliness are associated with earlier death, but social isolation can predict death even when loneliness does not, indicating that the emotional effects of being alone are only part of the problem. How isolation leads to death is still unclear.

“Both social isolation and loneliness were significantly associated with greater odds of mortality [in the study],” said Julianne Holt-Lunstad, a psychologist at Brigham Young University in Utah who was not involved in the research, in an email to The Scientist. “This study adds to our understanding by examining [the] relative influence [of each].”

Research has previously linked loneliness with stress-related ailments, such as heart problems. But “social connections also do other things, such as providing people with information and advice and practical help,” Steptoe said. Social isolation could also be associated with unhealthy habits, such as smoking or lack of exercise. “We were questioning, if you’re socially isolated and you’re lonely, are you at even higher risk of mortality?” he said. Surprisingly, when the researchers controlled for preexisting health problems in the study’s 6,500 participants—taken from the English Longitudinal Study of Ageing (ELSA)—they found that, while social isolation was associated with increased death risk, loneliness was not.

The research contradicts previous findings in other cohorts, however. A 2012 study published in the Archives of Internal Medicine and using the US-based Health and Retirement Study (HRS), for instance, found that people reporting some loneliness were more likely to die during the term of the study, even when the researchers controlled for preexisting diseases.

The study’s lead author Carla Perissinotto, a geriatrician at the University of California, San Francisco, told The Scientist in an email that the discrepancy could simply reflect the looser definition of loneliness she adopted for her study. But Steptoe said that even with a more inclusive definition, his group got a similar result: it didn’t predict death.

John Cacioppo, a social neuroscientist at the University of Chicago, posited that the different cohorts—the HRS and ELSA groups—vary in cultural character, which may affect the relationship between loneliness and death. For instance, British participants could be reporting loneliness differently, or perhaps loneliness affects British people differently than Americans.

“It raises lots interesting questions to be examined,” Cacioppo said.

Steptoe was skeptical that national differences could be influencing the results, however. Average levels of loneliness in the United States are comparable to those reported in the U.K., he noted. “I don’t think there is any good evidence for a difference in how loneliness is understood or experienced, though we can’t rule it out.”

Studies of the effects of social isolation are particularly important as the proportion of elderly people living alone increases in countries like England and the U.S., Steptoe added. “We have to keep an eye on social connections in older people and try to reduce isolation.”