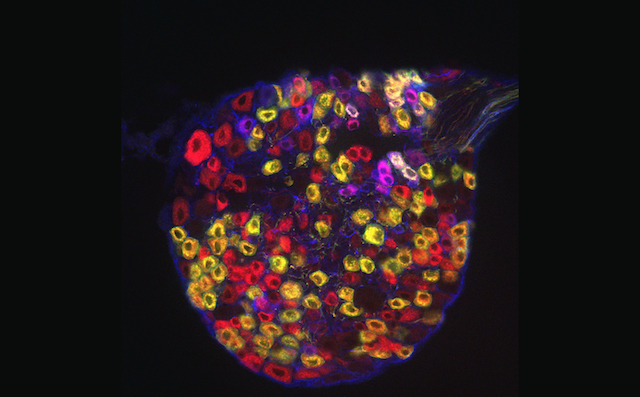 Neuroscientists have long debated how itch and pain overlap in the nervous system. Although itch was once thought to arise from the same neurons that generate pain, later observations disputing this theory led many to believe these sensations had distinct neural circuits. In a study published today (February 22) in Neuron, researchers report that a subset of “itch-specific” nerve cells in the murine spinal cord are also involved in sensing pain, bringing the specificity theory into question.

“We were surprised that contrary to what the field believes, neurons [in the spinal cord] coded for both pain and itch sensations,” coauthor Shuhao Sun, a neuroscience graduate student at Johns Hopkins University, told The Scientist. “[This] means there can be some crosstalk between these two sensations in...

Historically, the observation that pain could quell itch led many neuroscientists to subscribe to the intensity theory, which suggested that, in the same neurons, weak stimulation generated itch, while strong activation led to pain. However, this theory was largely abandoned around the 1980s when several groups discovered that weak painful stimuli did not lead to itch and that strong itch stimuli did not lead to pain. Instead, many researchers adopted the labeled-line theory, which proposed that there were separate neurons dedicated to each sensation.

In a 2013 Nature Neuroscience paper, Xinzhong Dong, a neuroscientist at Johns Hopkins University, and colleagues discovered itch-specific primary sensory neurons in the skin of mice, providing additional evidence for the labeled-line theory. These neurons were selectively activated by itchy stimuli; removing them diminished itch responses but retained pain reactions. When Dong and colleagues genetically modified mice so that these neurons were activated by capsaicin (a compound found in peppers that can induce pain), these mice responded to the painful stimuli with itch-related behaviors.

For its latest study, Dong’s group wanted to see whether neurons along the itch pathway retained their specificity in the spinal cord. To do so, they investigated neurons expressing the gene for gastrin-released peptide (Grp), which prior studies suggested was an itch-specific neurotransmitter in the spinal cord.

First, the researchers examined slices of spinal cords from mice and discovered that the Grp nerve cells received inputs from both itch- and pain-sensing neurons. Then, they selectively stimulated the Grp neurons in genetically engineered mice by injecting chemicals that either induced pain or itch and observed both pain- and itch-related behaviors. However, when painful stimuli were too strong, the animals exhibited reduced responses to pain—and removing the Grp neurons reduced the animals’ responses to itch while increasing responses for pain.

“When a strong pain signal comes in, it triggers a brake system so pain is actually reduced by this subset of neurons,” Sun said. “We think [that this occurs] via the endogenous opioid system.”

According to Sun, one potential explanation for why these neurons only inhibit high-intensity pain is that itchy stimuli don’t activate these neurons strongly enough to trigger the “brake” system. “These neurons are only weakly activated [to itch-inducing drugs], but when we give them painful substances, these neurons can be strongly activated,” he explained. This makes sense, he added, because the neurons are sensitive enough to detect weak painful signals to avoid potential tissue damage, but will avoid the overwhelming sensations associated with strong pain signals.

The study “throws a bucket of cold water on the labeled-line idea” said Steve Davidson, an anaesthesiology professor at the University of Cincinnati who was not involved in the study.

“There’s this controversy over selectivity and intensity coding that’s been going on like a tennis match,” Davidson told The Scientist. “This paper kind of serves the ball to another court, suggesting there’s some intensity coding going on in the central nervous system at the level of the spinal cord, [and] I think that’s pretty significant.”

However, Mark Hoon, a sensory biologist at the National Institute of Dental and Craniofacial Research who was not involved in the work, opined that it is too soon to dismiss selectivity in pain and itch circuits. “I don’t think [this study] necessarily settles the issue of what pattern of coding is occurring,” he said. “It’ll be an interesting few years while things get sorted out.”

“This paper sets up a nice circuit in the spinal cord that can be explored further,” Davidson said. “There’s going to be a lot of curiosity to find the neurons that are next in line after the Grp neurons that encode pain or itch from the spinal cord up into the brain.”

This is one question the authors plan to investigate. Because Grp neurons don’t project their axons to the brain, Dong explained, it is likely that the next “relay station” along this pathway is in the spinal cord.

Down the line, Dong said he thinks this newly discovered pathway could also have therapeutic applications. “We want to know whether these neurons behave differently under chronic pain or chronic itch conditions,” he said. “If in chronic pain conditions, [for example], these neurons lost control of inhibiting strong pain, understanding that mechanism may lead us to future treatments.”