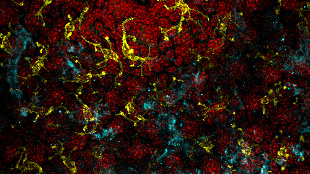 Immune cells surrounding hair follicles in mouse skin. These hair follicles are home to a diverse array of commensal bacteria.FLICKR, NIAIDScouring the genomes and body-wide microbial communities of 93 people, researchers have discovered a link between the composition of the microbiome and genetic variation in innate immunity, phagocyte function, and other immune pathways. The research was presented by University of Minnesota population geneticist Ran Blekhman today (October 24) at the American Society of Human Genetics 2013 annual meeting in Boston.

“This is cool stuff,” Lita Proctor from the National Human Genome Research Institute wrote in an e-mail to The Scientist. “This study is the one of the first documenting the relationship between microbiome composition and the human genome.”

Other researchers have linked specific gene variants to alterations in the human microbiome, noted George Weinstock of The Genome Institute at Washington University, whose own work has shown that...

While working as a postdoc in Andrew Clark’s lab at Cornell University, Blekhman knew that the composition of the microbiome was linked to various diseases, like diabetes, and that such diseases had also been shown to have a genetic component. So he was curious to learn how the microbiome is connected to the genes of the host.

To answer this question, he and his colleagues turned to the Human Microbiome Project, led by Proctor, which has produced publically available data on individuals’ microbiomes from 15 different body sites, including the gut, skin, and mouth. The composition of the microbiomes had been determined by metagenomic shotgun sequencing—the sequencing of all the genetic material in a sample—so in addition to the bacterial DNA, the project had also collected and sequenced bits of the host genome. Normally these host data are simply cast aside, but upon aligning the sequences to the host genome, “we can actually get pretty good genome-wide coverage,” Blekhman said—about 10-times coverage of the entire host genome.

The team first looked for overall correlations between host genetic variation and microbiome composition, finding “pretty significant correlations” in 10 of the 15 body sites. “Individuals with more similar genomes have more similar microbiomes,” Blekhman said. But without controlling for potential confounding variables, like diet, the researchers couldn’t be sure whether the correlations were truly a result of genetics, or if they were influenced by environmental factors. So the next step was the more stringent analysis of looking for correlations between single nucleotide polymorphisms (SNPs) and microbiome composition.

The researchers did identify hundreds of correlations in the millions of SNPs they looked at, but there was another concern. “Typically it takes [thousands] of subjects to achieve statistical power in a GWAS or other genome-wide analysis . . . [s]o I am a little surprised that they feel they can draw a conclusion based on 93 subjects,” Weinstock wrote in an e-mail.

Recognizing this deficiency, Blekhman and his colleagues searched for more “big picture” correlations in the pathways in which the correlated SNPs were found. “[For] any given SNP, it’s hard for me to say with confidence this one is really correlated with the microbiome and significant,” he said. “But if we take enough of those correlated SNPs and do this pathway analysis, there’s likely less of an effect for those false positives.”

And at the level of biological pathways, the researchers did find some interesting trends. “The biggest result we have is a lot of these pathways are involved in immunity,” Blekhman said. “[It seems that] host genetic variation and immunity-related pathways and genes could maybe control the structure of the microbiome.”

“The human immune system is arguably the most important component of the human genome that interacts with the human microbiome,” Proctor said. “This kind of study is essential if we are to understand the evolutionary basis of the microbiome-genome relationship and its role in health and in disease.”

The team also identified some cancer-related pathways that seemed to correlate with microbiome composition. Now in his own lab at the University of Minnesota, Blekhman is investigating the relationship between host genetics, the gut microbiome, and susceptibility to colon cancer. “So let’s say if you have a specific gene variant, you might not have cancer; if you have a specific bacterium, you might not have cancer; but if you have both, you might increase your susceptibility for the disease,” he said.