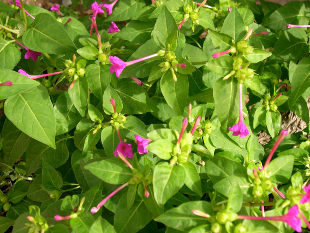 Mirabilis jalapa (the four o’clock flower) is the host of Phytophthora mirabilis, the sister species of the Irish potato famine pathogen Phytophthora infestans. COURTESY OF SOPHIEN KAMOUNThe fungus-like pathogen Phytophthora infestans and its sister species, Phytophthora mirabilis, infect different species of plants. P. infestans—the culprit of the 19th-century Irish potato famine that killed some 1 million people and forced another million out of the country—infects potatoes, tomatoes, and other members of the Solanaceae family, while P. mirabilis exclusively infects the four o’clock plant (Mirabilis jalapa). Contributing to the host specialization of these pathogens is a single amino acid change in an effector protein that binds and inhibits a plant protease defense, according to a study published today (January 30) in Science.

“It’s a very strong paper in the sense that it’s clearly connecting the biochemistry to evolution in general,” said molecular plant...

“The work is excellent and important,” Bruce McDonald, a plant pathologist at the Institute of Integrative Biology in Zurich, Switzerland, told The Scientist in an e-mail. “[I]t is a rare illustration of the molecular changes that underlie pathogen adaptation in natural and agricultural ecosystems.”

In 2010, Kamoun, a plant pathologist at the Sainsbury Laboratory in the U.K., and his colleagues compared the genomes of P. infestans and P. mirabilis, and found evidence of adaptive evolution in each of the two species, which split about 1,300 years ago. They identified a total of 345 genes that had signatures of positive selection, including 82 effector genes, whose products interact with host target molecules to aid infection.

In the new study, Kamoun’s team takes a closer look at one of these effectors, the cystatinlike protease inhibitor EPIC1, which targets defense proteases of the host. The researchers first tested the interactions of each pathogen’s version of the effector—EPIC1in P. infestans and PmEPIC1 in P. mirabilis—with proteins from their own and each other’s host plants, and found that the effectors bound more strongly to proteases from their own host species. EPIC1 was a far better inhibitor of the papainlike cysteine protease RCR3 from the tomato (Solanum lycopersicum) and three wild potato species than PmEPIC1; PmEPIC1 was more effective than EPIC1 at inhibiting the M. japana protease Mirabilis RCR3-like protease 2 (MRP2).

“Thus, EPIC1 effectors function more effectively on their respective hosts, supporting the hypothesis of effector specialization after a host jump,” Gitta Coaker, a plant pathologist at the University of California, Davis, wrote in a perspective that accompanied the paper.

“We know that these pathogens have evolved by host jumps . . . so you expect these effectors that are interacting and binding all of a sudden to be faced with different proteins,” Kamoun said. “This [result] does fit with that hypothesis, that following host jump the effectors are going to evolve.”

To further explore the biochemical basis that allowed the pathogens’ effector proteins to specifically bind the proteins of their own host species, Kamoun and his colleagues compared the amino acid sequences of the EPIC1 effector proteins from the two pathogens, as well as the host proteases of their hosts, and found a single amino acid difference in each that largely explained the specificity.

“In this case, one of the specific amino acid changes responsible for the adaptation of an old pathogen to a new host was revealed and carefully documented,” McDonald said.

The results also support the idea that specialist pathogens face a tradeoff, Kamoun said: when they adapt to a new host, they lose the ability to infect their former host. It would be interesting, then, to explore the adaptive evolution of more generalist pathogens that infect a variety of host species, Huitema noted. “That’s a question that I think is an open one.”

“It’s one of those papers where you realize how much we have to learn about the impact of genome evolution in pathogens in plants and what the biochemical basis of that is,” said Huitema. “I think this is a great taster for many more exciting discoveries yet to come.”