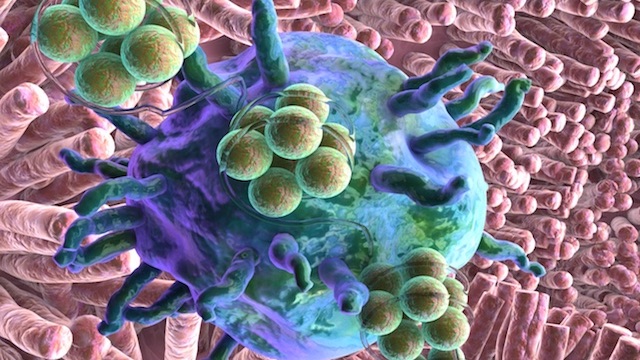 Researchers are only beginning to understand the roles of the hundreds of proteins involved in reading, writing, and erasing the epigenome. One of the epigenetic regulators, SP140, which is mutated in a number autoimmune disorders, including Crohn’s disease and multiple sclerosis, is also essential to macrophage function and intestinal homeostasis in both humans and mice, scientists reported today (March 3) in Science Immunology.

“Many immune-mediated disorders are driven by a combination of genetic susceptibility as well as environmental influences [so] epigenetics is a suitable critical juncture between those two aspects of the disease,” said coauthor Kate Jeffrey, a researcher investigating the epigenetic control of innate immunity at Massachusetts General Hospital.

Jeffrey and colleagues decided to focus on SP140 because prior genome-wide association studies characterized it as the culprit behind a number of autoimmune disorders, including...

In addition, the team knocked out the SP140 gene in the immune systems of model mice, finding that the loss of this epigenetic reader weakened the rodents’ intestinal barrier defenses, altered the balance of their gut microbes, and exacerbated intestinal inflammation.

“It’s interesting that [SP140] both changes the response to pathogens and makes colitis worse,” said Alexander Marson, an assistant professor of microbiology and immunology at the University of California, San Francisco, who was not involved in the study. “Figuring out exactly what it does in the context of infection in vivo will be interesting.”

“Initially, when we found this epigenetic mediator to be immune-restricted, we thought that would make a great therapeutic target because . . . you may not get off-target effects,” Jeffrey said. “But it turns out that you would not want to inhibit this particular epigenetic reader because its loss results in intestinal inflammation.”

Lastly, the group discovered that people with Crohn’s disease who carry single-nucleotide polymorphisms (SNPs) in SP140 genes have a distinct form of the disease. What makes their phenotype different, Jeffrey explained, is that they have a “suppressed immune signature in their peripheral blood immune cells.”

“This is a very comprehensive study characterizing an unrecognized role of an epigenetic reader in innate immune responses,” Theresa Alenghat, an immunobiologist at Cincinnati Children’s Hospital Medical Center who was not involved in the work, wrote in an email to The Scientist.

“The use of a wide range of approaches and models strengthens the study. However, I find a quite superficial connection between one part and another,” Esteban Ballestar, the leader of the chromatin and disease group at the Bellvitge Biomedical Research Institute in Spain, who also was not involved in the study, wrote in an email. “Ideally, it would have been better to isolate macrophages from CD [Crohn’s disease] patients with specific SP140 variants.”

While targeting SP140 may not be the best therapeutic target for Crohn’s disease, the researchers found patients who had lower levels of SP140 in their intestines were also the ones who responded better to anti-TNF therapy. “So [one] possibly here is perhaps through precision medicine approaches . . . to tailor these therapies,” Jeffrey said.

“This [study] has shown the importance of epigenetic mechanisms for intestinal health and immune homeostasis more generally,” Jeffrey adds. “We could leverage that to target other epigenetic enzymes that might be overexpressed or function incorrectly.”